Scotland, England, Australia and the US were all represented.

Dynamic double act Frank Zafiro and Colin Conway tickled my fancy more than once, more than twice even, but 2 of their Charlie 316 series rocked.

Jane Harper and Ben Hobson shone from Down Under

Trivia - 4 books enjoyed via Audible, 2 x paperbacks,  4 read on the laptop as the Kindle was ailing 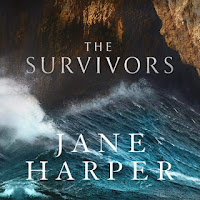