ALL DUE RESPECT BOOKS

* A work in progress page 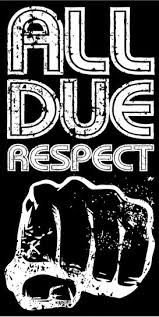 All Due Respect Books

One of my favourite publishers bar none. I'm going to try and read their entire catalogue.
David Nemeth and Chris Rhatigan (editors) - All Due Respect 2021(2022)

Sharp Knives & Loud Guns is the brand-new collection of Paignton Noir Case Files from cult crime writer Tom Leins, featuring the novelettes Slug Bait, Smut Loop and Sweating Blood.
Traumatised and brutalised after a grisly encounter with a warped sex killer, Slug Bait finds cut-price private investigator Joe Rey licking his wounds at a decrepit caravan park on the cliff path high above Paignton. Violence has a way of finding Rey, however, and an altercation involving local amusement arcade tycoon Raymond Coody sees him dragged back into town—where his name is now on all of the wrong people’s lips. Rey’s reckless disregard for his own safety quickly wins Coody’s trust, but his new associate harbours some dark secrets, and things are about to get very bloody, very quickly.
Joe Rey has been hired by so many queasy middle-aged men in his time, an assignment from Frank ‘The Wank’ Farris barely registers. In Smut Loop Rey is forced to get reacquainted with Cherry, a middle-aged sex worker who has more unsavoury connections than he does. When she proposes an elaborate blackmail scheme, Rey is suckered in, but the job quickly spirals out of control—and they are forced to perform an unhinged job for an extremely powerful man. Rey is out of luck, and out of his depth. With friends like this, who needs enemies?
After a series of violent misadventures, Joe Rey has blood on his hands and murder on his mind. Now working as a security guard at Paignton Cliffs Caravan Park, Rey finds himself dogged by unhinged cop Carver, who is desperate to know where the bodies are buried. When a sinister figure from Rey’s past re-emerges, determined to force him to participate in a sick new game, Rey is forced to confront his past—if he still wants to have a future. As the temperature rises, so does the body-count, and Rey finds himself Sweating Blood. Will he see it through to the bitter end, or has his luck finally run out?
Lee Matthew Goldberg - Stalker Stalked (2021)

Lexi Mazur is a depressed, alcoholic, pill-popper whose only joy has become her reality TV shows, often fantasizing that the people on TV are a part of her world. After her boyfriend Steve leaves her, she fixates on the show Socialites and its star Magnolia Artois, following every facet of the girl’s life on social media in the hopes of befriending and becoming more like her.
But stalking isn’t new to Lexi. She ultimately won over her ex Steve by following and manipulating every minute detail about him so he’d fall for her. In fact, she landed her other ex-boyfriend Jeremy in the same way. Being a pharma rep, she’s used to manipulation to get doctors to buy her drugs, along with the perk of saving pills for herself.
But what happens when the stalker gets stalked?
Recently, Lexi has felt someone watching her: in her apartment in Queens, at her job. At first, she thinks her mind’s playing tricks, but the watcher is behaving just like she would. And soon they begin leaving threatening clues like she starts to do to Magnolia once her obsession grows more dangerous. Is it one of her exes out for revenge? Her only real friend from childhood who she’s always had an unhealthy rivalry? A detective who may have figured her out? The reality star Magnolia trying to turn the tables? Or even someone she might not know?
Lexi learns the only way to beat her stalker is to use her own stalking prowess to outsmart them at their own game. But has she finally met her match?
Michael Penncavage - Person Unknown (2021)

Life is going great for Steve Harrison. Only thirty-five years old, he’s already a Senior Vice President for a major financial firm. He’s admired by his co-workers, his friends, his wife—and his mistress. There’s nothing he can’t handle. The world, as they say, is his oyster.
And all of that is about to change.
His phone rings and the caller says that his name is “Bill”. That’s it. Just Bill. And Bill’s got a message. Steve’s wife, Kathy, has been kidnapped. If Steve wants her back then he’ll do exactly what he’s told. Deviate even the slightest from the plan, Bill tells him, and Kathy will die.
It’s a classic kidnap.
Or is it?
Matt Phillips - To Bring My Shadow (2021)

TO BRING MY SHADOW by Matt Phillips is a haunting, hardboiled tale that follows detective Frank “Slim Fat” Pinson and his partner as they try to unravel the vexing mystery surrounding a who-done-it drug murder in San Diego.
“An authentic portrayal of San Diego, fantastic characterization, and Phillips’ sharp-as-a-knife writing skill make this a must-read.” —Curtis Ippolito, author of Burying The Newspaper Man
Andy Rausch (ed.) - Dead-End Jobs: A Hitman Anthology (2021)

Contract killers have long been a point of interest for readers of crime fiction and action film fans. This collection offers up eighteen works of short fiction from some of the hottest writers in the business, including Joe Lansdale and Max Allan Collins.
“An incredible collection of powerful and haunting stories that exist in that shadowy realm between tragedy, nihilism and noir.” —S.A. Cosby, author of Blacktop Wasteland
Stephen D. Rogers - Shot to Death: 31 Crime Stories (2021) (July, 2021)

Thirty-one bullets that will leave you gasping for breath…
From hardboiled to noir to just plain human, these stories allow you to experience lives you escaped, and to do so with dignity, humor, and an eye toward tomorrow.
“What sets those particular stories apart is their ability to catch the browns and grays of the characters quickly, subtly and persuasively.” —Barnstable Patriot
“The sometime EQMM poet is so smoothly readable, explores such a variety of inventive situations, and is so ambitious in structure and theme, even the stories that don’t quite hit the mark make enjoyable reading.” —Ellery Queen Mystery Magazine
“Each story is fresh and original, set against a New England backdrop, and includes colorful characters from diverse walks of life. Each plot twists and turns to its totally surprising and unpredictable ending.” —Examiner
Rob Pierce - The Things I Love Will Kill Me Yet (2016) (April, 2021)

After suffering a lifetime of tyranny under her father’s oppressive rule, when Lou-Lou sees a chance to make a break with the man she loves, she takes it. Problem is, daddy’s also known as Big Bobby Joe, a dangerous and powerful man in the local area—powerful enough to put out a sixty grand bounty on the head of the man she’s run off with, who also happens to be one of his ex-employees.
With every criminal affiliate out looking for them, making good on their getaway doesn’t seem promising. Even their so-called friends are on the take, willing to pull a double-cross if that’s what’s going to turn them a quick buck. But Big Bobby Joe hasn’t counted on his daughter's resolve to distance herself from him. No matter what he throws at her, no matter what he does, she’s going to get away—or die trying.
Chris Rhatigan and David Nemeth (ed.) - All Due Respect 2020 (2020) (April, 2021)

Dominick Prince has been a magnet for trouble his entire life. A series of poor life choices and their violent consequences have crushed his spirit. Desperate to outrun this burgeoning rage before it fully consumes him, Dominick accepts an offer he doesn’t trust from an old high school classmate. Dutchy Kent says he wants to make one last-ditch effort to prove his acting chops by mounting the New York City debut of a play based on one of Dominick’s stories, but the true story involves the real estate empire of a notorious Queens drug dealer and $1.2 million in cash. Dutchy would love to find that cash, but he needs someone else to do the dirty work, someone who attracts trouble and is easily manipulated.

Unfortunately for Dutchy, the Dominick he knew in school is gone. The Dominick who shows up at his office is bitter, twitchy, and repulsed by the trash heaps and junk yards of Long Island City that don’t fit into his vision of a New York debut. None of that matters to Dutchy though who continues with his scheme, unaware that every insult, every passive aggressive comment, and every physical intimidation pushes Dominick one step further toward his rapidly approaching breaking point.

Winter has set in a small town on the California coast and a fishing vessel has been lost amongst the gray waves. Grace runs the bowling alley and ghosts through his own life. He lives in the layer of fat between the underbelly and society. He completes tasks given to him by the people who run the town and is grounded only by his aging grandmother and her weekly bingo trips.

Grace is charged with issuing payments to the fishermen’s widows. He pulls on his funeral suit and borrows his grandmother’s New Yorker. When Grace is unable to find one woman, he uncovers something that threatens the oligarchy’s reign and his way of life.

With the Right Enemies is the bullet-drenched follow-up to Uncle Dust, Rob Pierce’s acclaimed debut novel about a bank robber’s disastrous fling with domestic life.

Scumbag newspaper reporter Lionel Kaspar aimlessly wanders from one scam to the next. Trying to claw his way to anywhere, Kaspar fabricates news stories and blackmails a local bureaucrat. What little success Kaspar stumbles upon he wastes betting on sports and drinking. But when Greg Hulas, his competitor, starts investigating him, Kaspar becomes desperate to maintain his position.