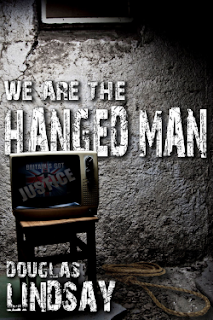 I haven’t read anything from Douglas Lindsay for a few years now, my last excursion being one of the 6 or 7 Barney Thomson barber-cum-serial killer books he penned. Whilst my memory of these has diminished somewhat over-time, I can recall black humour prevalent throughout the books cataloguing the absurd happenings that befall the hero/villain Barney.

Hanged Man features a morose, depressive detective – Jericho who is reluctantly catapulted onto prime-time TV and the latest reality show offering, Britain’s Got Justice. Throw in a killer recently released - 30 years after Jericho put him away, some Tarot cards, a missing BGJ finalist, some sex – not all of it consensual, murder and a dose of tabloid trashing with the show’s crazed executives and producers keep one eye on the ratings and their careers and the story speeds along to a decent conclusion.

Lindsay leaves the doors open for future tales with Jericho and his likeable sidekick, Haynes at the hub. Wisely in my opinion, because they are definitely a team I would read more about in the future. For some reason I’m reminded of Joe R Lansdale’s Hap and Leonard series though neither Jericho or Haynes is black or gay or from Texas!

I’ve definitely been missing out during my Lindsay sabbatical. He had me roaring at the vision of the diminutive Noel Edmonds either commentating or participating in an act that typically wouldn’t be seen on prime-time television. Would it even be possible on ice, Douglas? Have you done some research?

I’m off to the attic to try and dig out my old Barney Thomson books.

I’ve probably put off reading this for a couple of years now, not from any dread that it wouldn’t be any good but more from the realisation that once I’d read it, there was no more Stella on the TBR pile. You don’t always get that sense of anticipation with every book you pick up and crack the spine on.


Since I read his first offering - Eddie’s World a few years ago, I’ve tried to catch up and keep pace with all his novels. Fortunately, he has another one out this year. Unfortunately, as far as my pockets go, that’s another one to be added to the never decreasing wish-list.


In a nutshell, there’s plenty of gritty action, character, dialogue, wise guys and sleaze throughout.


Stella has been likened to George V. Higgins, and having read a few of his early books in the last couple of years, - The Friends Of Eddie Coyle and A Rat On Fire, I can see why. For me there’s no real comparison though, Charlie Stella has yet to disappoint.


My reading tally for this year is over 80, this is definitely up in the top 5, alongside Michael Zadoorian’s Leisure Seeker, Jeremy Dun’s Free Agent and Lynn Kostoff’s The Long Fall.

BLURB........ Tia and Mike Baye never imagined they’d spy on their kids. But their sixteen-year-old son Adam has been unusually distant lately, and after the suicide of his best friend Spencer Hill, they can’t help but worry. Within days of installing a sophisticated spy program on Adam’s computer they are jolted by a cryptic message from an unknown correspondent that shakes them to their core: “Just stay quiet and all safe.”

As if Mike Baye isn’t dealing with enough, he also learns that Lucas Loriman, the sweet kid who grew up next door, is in urgent need of a kidney transplant. As the boy’s doctor, Mike suddenly finds himself in possession of an explosive secret that threatens to rip the Loriman family apart at the seams.

Nearby, while browsing through an online memorial for Spencer, Betsy Hill discovers a surprising detail about the night of her son’s death. Before she can find out more, Adam disappears, taking the truth with him and sending shockwaves through the neighborhood.

As the lives of these families collide in tragic, unexpected, and violent ways, long-hidden connections in their small suburb begin to work their way to the surface. And when an unidentified Jane Doe is beaten to death not far away, those connections threaten to turn this quiet community upside down—and force these desperate parents to decide whether there is any line they won’t cross to protect those they love most in the world.

My thoughts......
I haven't picked up a Coben book for a fair few years, before last month, a bit like buses you wait for ages then 2 come along together.

Enjoyable but it didn't rock my world. I haven't read enough of Coben to judge whether it is one of his better books or not,but it passed the time easily enough, the story flowed, the characters were likeable.

I was evicted from my study/den earlier this year to allow my youngest daughter her own room. A reasonable course of action designed to promote love and harmony within the household which contains myself, my better half and three teenagers.


My books which were double-stacked and triple-stacked in places, pretty much floor to ceiling around three walls were unceremoniously dumped in the loft.


I'm guessing I have between 2000-2500 books in total, not including all the online articles, e-zines and magazines I downloaded, and mostly printed off....PLOTS WITH GUNS, HARDLUCK STORIES, THUG-LIT etc, etc.


My mission is several-fold.


I don't want my kids or wife to try and sort my crap out once I've gone. So sort the books out into some semblance of order.


2. Read and get shot of all the loose files, papers, magazines.


Out of the 16, I've only read 5 of the authors previously, I'm a kid in a sweet shop - I buy up an author's output because it looks good, and not because, I like book A, I should now read book B.


What was the name of the girl in Charlie and the Chocolate Factory? The greedy one......that's me!


Anyway sort the books, catalogue them - because I like lists, plus when I decide I do want to read the Vince Flynn - Mitch wotshisname series of which I have 11 - I can find them. Or the Fleming Bond books (12 of - none read) 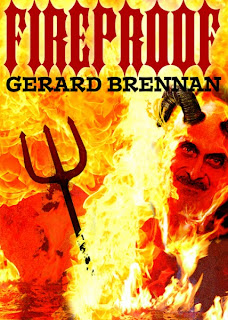 I was lucky enough to get a copy of this from the publisher.
Does that mean I’m expected to praise it to the hilt?
No, I doubt it.


I will start by saying I’m an inexperienced book reviewer, though I do tend to rely a lot on what other people say about books before purchasing most of the time. I find it to difficult to determine how much of the story to discuss without giving away too much of the plot and how the finale unfolds. (Spoiler alert!)


Previously, I’ve found myself re-hashing the synopsis on the back of the cover, and what’s the point in doing that? If the book has piqued someone’s interest then typically they will have picked it up in store, or read the same information on the author or publisher’s website.


I suppose my reviews will contain a lot of box-ticking,


Did I enjoy it, was I entertained? Yes, yes


Would I read more from the author? Yes


Was it un-put-down-able? No


Did I laugh or cry, or feel some empathy or connection to the characters? Yes


Would I want to read more about them in the future? Hmmm....maybe


Would I recommend it to others? Yes


Was it memorable, will it haunt me or stay with me? No


Will I find myself thinking about it in the next week or two? No


Would I re-read it again at some point in the future? No


Would I want my money back? No, irrespective of the fact I didn’t pay for it.


On the scoreboard then probably .........7.5 out of 12, which seems low considering that I really enjoyed it. Some of the plus points above must carry more weight than some of those that scored negatively.


Well worth a look if you have a sense of humour, don’t take religion too seriously, and enjoy fine writing that isn’t preachy or pretentious......literature it ain’t.
Posted by col2910 at 06:13 No comments: