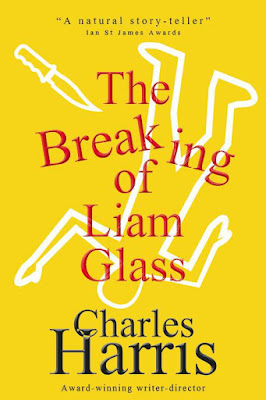 With London knife crime now on the rise, this is not so much a whodunnit as a blackly comic what-they-did-after-it satire, that resonates in a timely way.

Teenage footballer Liam Glass is stabbed on an estate next to London’s Regents Park and, with an eye to the main chance, journalist Jason Crowthorne sets out to make the most of the story and build a crusade against teenage knife-crime.

In the following 24 hours, Jason creates his campaign, hiding a scoop from rival journalists and avoiding arrest. But other powerful figures are determined to exploit the boy’s story as much as they can, and they have fewer scruples! Liam Glass is a darkly satirical look at the deep splits in modern communities, asking deep moral questions in a sympathetic and humorous way.

A slight departure from my usual crime fiction reading with Charles Harris and his satirical novel, The Breaking of Liam Glass. A young teenager gets stabbed at a cashpoint and robbed of his phone and while he lays in a coma in hospital, the aftermath unfolds.

Jason Crowthorne, a journalist with a local rag seizes the opportunity to build a career for himself and a healthy bank balance by manipulating Liam’s story - sexing-it up with the introduction of an absent celebrity footballer father (fake or real, who cares?) and running with it in one of the nationals. A tad delusional, he sells it to his conscience, by convincing himself that a campaign to raise awareness about knife crime might also take off.

We also have a local politician, concerned about a forthcoming election and the prospect of losing her seat. A struggling gym owner and his partner – a good guy who foolishly discovers a blood-stained knife (the knife in question – who knows?) and moves it, then in another panicked action moves it again. A police detective, struggling to cope with fatherhood and thrust to the forefront of the investigation into the crime.

A topical book. We get a glimpse of life in the world of tabloid journalism with the vultures gathering as rumour and counter-rumour spread with a fake celebrity involvement in the tragedy. Facts are no longer a consideration if a falsehood can sell some copy. Shady deals for lies, as Jason worries about getting his byline on the story before the opposition hijack it. Dreams of a foot up the journalistic ladder and being able to offer more to his daughter; a daughter who has always taken second place to his quest for a story.

Social media also plays its part with rumour circulating about the racial identity of the attackers spreading and causing tension in a community used to being ignored by politicians. Sounds familiar.

I enjoyed the book and Harris had me flip-flopping in my attitude and feelings towards Jason. One minute I deplored his tactics and actions; at other times I sympathised with his plight and wanted him to succeed and seal the deal and get his story over the line.

An interesting book, with some serious points made regarding life in present-day Britain, with a few wry chuckles along the way.

Charles Harris is an award winning film writer-director and a best-selling non-fiction author. The Breaking of Liam Glass is his debut novel.