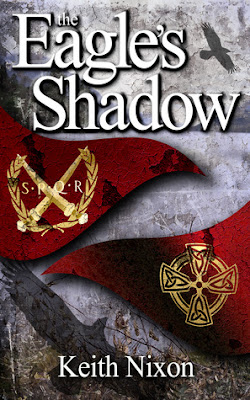 
One man stands against the might of the Roman Empire. His name is Caradoc.

In Rome a new Emperor, Claudius, accedes the throne. But he is politically weak, enemies who would take his place circle and plot. If he is to survive Claudius needs a triumph, one that marks him as a leader of men.

Claudius’s eye turns to the mysterious isle of Britannia, home of the supernatural Druids and brutal, wild-eyed warriors, reputed to fight naked. The place not even Julius Caesar could conquer.

AD43 and a massive invasion force, commanded by Aulus Plautius, lands on a tiny corner of Britannia. Caradoc, King of the country’s most powerful tribe, assembles an army to throw his enemy back over the water and into Gaul.

But divisions are rife and there are those who are secretly working with the Romans for their own benefit. The very future of the country is at risk and only one man can safeguard it…

Read the UK best selling historical fiction novel everyone is talking about. The Eagle's Shadow reached no. 1 in historical mysteries, no. 2 in war fiction on the UK Amazon charts.

'A hugely enjoyable debut novel from Keith Nixon.'
Ian Ayris, author of Abide With Me

I’m a big fan of Keith Nixon’s books so decided to take a punt on one of his historical efforts which is a big change of genre for me. How did we go then?

Well I enjoyed it up to a point, but I don’t think it has redirected my reading compass.

We are in ancient Britain and the Romans are coming again. Intrigue and in-fighting among the British tribes, some want to rally together to repel the invasion and some have hitched their colours to the Roman mast, feeling an improvement in circumstances for their clan will arise from a Roman conquest. However, those aiding the invaders have to play the time-honoured game of deception, duplicity and subterfuge.

We have our heroes and villains and there’s a forging of alliances and a tentative romance….bravery, loyalty, love, family conflicts, friendships enjoyed - with plenty of banter and a sprinkling of humour,  battles, camaraderie, death, deceit, double-crossing and an enjoyable tale which I was keen to read through and discover the outcome.

I have to assume Nixon has done his research and has blended fact into his fiction, but as I’m not a student of ancient British history I’ll be leaving things at the assumption stage. I feel I know a bit more about the period than I did before, so never a bad thing leaving a book knowing more than when you started.

I was entertained, but I don’t feel compelled to read his second book in the series – The Eagle’s Blood - one which I assumes picks up and runs where we leave off here. Caradoc’s adventures will continue without me.

Thoughts on The Fix which was also read in May coming soon, much more my cup of tea than ancients Brits.