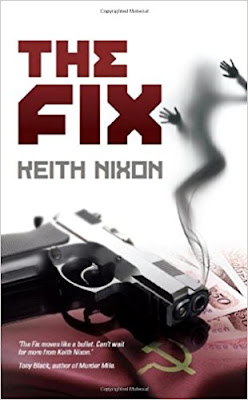 Murder. Theft. Sociopaths. And Margate. Just another day in banking then...

It’s pre-crash 2007 and financial investment banker Josh Dedman’s life is unravelling fast. He’s fired after £20 million goes missing from the bank. His long-time girlfriend cheats on him, then dumps him. His only friends are a Russian tramp who claims to be ex-KGB and a really irritating bloke he’s just met on the train. His waking hours are a nightmare and his dreams are haunted by a mystery blonde. And to cap it all, he lives in Margate.

Just when Josh thinks things can’t get any worse his sociopathic boss — Hershey Valentine — winds up murdered and he finds himself the number one suspect. As the net closes in Josh discovers that no one is quite what they seem, including him, and that sometimes help comes from the most unlikely sources...

Part fiction, part lies (well, it is about banking) and excruciatingly funny, THE FIX pulls no punches when revealing the naked truth of a man living a life he loathes. This is a crime fiction novel with a difference...

'With a brilliant cast of madcap characters strapped tightly in, THE FIX hurtles along at a cracking pace.
A hugely enjoyable debut novel from Keith Nixon.'
Ian Ayris, author of Abide With Me

After a brief outing with the Ancient Britains in Nixon's The Eagle's Shadow, I'm back on terra firma now with The Fix.

I must admit when the book begins I was confused. Different characters, different events some of which seemed to be conflicting, however it was a pleasant confusion, one where you are happy to read on in the knowledge that all will be revealed in good time. Not the irritating confusion where you want to punch the author in the face and force feed them their book a chunk of pages at a time.

We have...... a Russian tramp, a socially inadequate computer whiz-cum-hacker who pretends he's someone else a lot of the time, a sex-addicted policewoman - she's hot, Josh our victim of the piece, Hershey his arsehole boss and Claire his cow of a girlfriend. Plus a few more to boot.

An enjoyable plot as Josh's life gets turned upside down and he's in the frame for a missing £20 million. Get out of that one sunshine.

Humour, sex, pace, action, a great setting, some interesting characters and some fantastic writing - whether its a bit of naval gazing from one of our characters.....

Life is, miserably, not that good to me. Never has been, never fucking will be. If I actually had the lack of good sense to believe in a God I would now know that he’s a bastard who deliberately makes mere existence bloody complicated for the average you and me.

or Nixon giving us our local landscape......

It’s not the most pleasant of routes either. To my right is a road that seems to carry sluggish cars and trucks whatever the time of the day. Beyond the clogged arterial thoroughfare is a wide strip of sand and then the North Sea, an expanse of muddy brown water dotted with massive ships heading in and out of the Thames. Beautiful it is not. To my left is Dreamland, the lurid amusement arcade which is alight with neon, flashing tubes and bulbs. It’s a shabby throwback to yesteryear where the local chavs have always hung out. Great if you want some drugs or black-market Viagra. Not so great if you want to keep your watch, wallet or dignity. Walk quickly, look straight ahead and ignore the knock-off Burberry is my rule.

I really enjoyed this one. My kind of book.

Earlier books which have been enjoyed are Plastic Fantastic, Fat Gary, Dream Land and Russian Roulette.