QUESTIONS AND ANSWERS WITH CHARLES HARRIS

Charles Harris, author and film director is the latest conscript to submit to some gentle questioning on reading and writing habits. 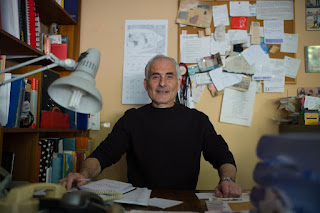 I don’t believe the writing is full time? What’s the day job? Can you tell us a bit about your career to date?

Interesting that you say that, in fact writing is my day job, or rather at the moment the day job is publicising my new novel.

I started in the film industry, as projectionist, working my way up through the cutting rooms and then wrote and directed a number of films in just about every possible medium – cinema, TV drama, TV documentary, you name it. I also wrote far too many scripts that never went anywhere. Looking back, they probably didn’t deserve to, but they were a great way to learn the craft and be able to hide all my mistakes.

I understand you have previously had some non-fiction works published. The Breaking of Liam Glass is your debut novel, how did it come about? Have you always written?

To answer the last question first, when I was trying to become a film director, the best advice I was given – by Mike Leigh, as it happens – was to keep doing something creative. It’s the biggest problem in film. You spend so much time waiting around you can forget what you’re all about.

So I spent a lot of time writing and keeping it well-hidden (see above). Then I started writing short stories, and had some success, two being shortlisted for awards.

The non-fiction books were accidents. I’d done a great deal of research into police slang for an unpublished novel and found it to be wonderfully funny, scurrilous, drily sarcastic. I pitched the idea to a publisher and he went with it.

I get up at four in the morning, run a half-marathon, mow the lawn, feed the cats, make bread and then settle down to write from four fifteen to…

OK, the truth is that I always mean to get up earlier, but generally get into my study by ten. If I don’t spend most of the morning at least thinking about writing I get very grouchy. Then the afternoon is for reading and doing all the other stuff that somehow accumulates, like fluff, around the edges of life.

Have you inserted family, friends, and colleagues into any of the characters in the book?

That’s a dangerous question. I can hear the lawyers panting in the background. The truth is – yes, but you’d never recognise them. I draw on true life to make characters real, but never the bits you’d expect.

For example, I once used my grandmother as a model for an elderly homicidal Portuguese farmer. She was not homicidal, as far as I know, nor Portuguese or a farmer, but she had something of the tone I was looking for. She never knew.

Jason – the desperate young journalist, stuck on a local paper – draws a great deal on my own frustrations over the years, my memories of dead-end jobs making unmemorable corporate videos.

But in many other ways, he is quite different from me. He’s braver, for one thing. Or perhaps more foolhardy. And is used to charming his way out of problems, which I’ve never learned to do.

Did you plot the book or make it up as you went along? Does the end result differ greatly from how you envisaged it?

I started the book seven years ago – and one of the starting points was a story about a knife crime that had been shortlisted for an award years before. So, to that extent I already had part of the ending on paper.

I did plan a fair bit, but I also changed a fair bit. I find the process is like cleaning a window, to see the view better. When you can see the view, you forget the grubby marks that have been wiped away.

Which is easier to craft – fiction or non-fiction?

I don’t think it depends on whether it’s fiction or not.

All good ideas push you into areas that are new and scary. Liam Glass was a massive challenge, a darkly comic crime satire, with multiple storylines and characters who have to be brought together in a satisfying way at the end.

If they were gems they wouldn’t be in my bottom drawer, but there are a number of projects I keep getting out and looking at, and saying to myself that one day I’ll solve the deep underlying structural problems of.

As it happens, I’m back on the police novel that sparked off the Police Slang book.

It’s darker than Liam Glass  - a psychological thriller. The latest draft has just gone off to the editor, and I’m distracting myself with the launch of Liam Glass and telling myself I don’t really care what she says and won’t try to throw myself out of the window when it comes back.

As it happens, I work on the ground floor, so that would be a rather ridiculous thing to do.

It’s all down to me. All film directors are control freaks, but actually you get very little control. There are too many ungovernable factors. In writing, no other idiots get in the way. It’s just me.

I’m the idiot getting in the way.

Two O’Clock Boy – a lovely debut crime novel by my friend Mark Hill. (It’s always a relief when a friend’s book turns out to be good).

Proust – I’ve always meant to read him and I’m working my way through. I couldn’t tell you what on earth is happening, if anything, or why it’s so fascinating, but it is. Characters, insights... honesty and truth again, in spades.

Dead Writers in Rehab – another friend, as it happens, the very funny Paul Bassett Davies. I sound like I’m log-rolling but it’s a very good, warm, compassionate, comedy with a serious theme. (Another sigh of relief).

Daily Rituals – by Mason Currey. Not a friend, this time. A compendium of the routines of all kinds of people, writers, inventors, artists, etc. Whatever odd routine you have, you’ll find someone here to reassure you that you’re not mad.

Teach Yourself Japanese – I started the book when I fell in love with Japanese cinema at the age of eighteen, but stopped when I got to numbers. Japanese number systems are very, very weird. But then I went back to the book recently when we were planning a trip there, and after we came back I kept going for no good reason other than I wanted to do something for which I had no good reason.

Just about everything and anything. I would have said I didn’t read fantasy, but then I read Ursula Le Guin. There’s so much to read and so little time.

Many. Catch 22, Bonfire of the Vanities. Most recently, John Niven’s The Second Coming.

God goes on a long fishing trip four hundred years ago, thinking mankind is more or less sorted, comes back today and is horrified at the mess – so he sends “the kid” down to deal with things again – by entering a reality TV talent show… It’s mad and very funny.

Lying on a beach.

Nightcrawler – a great noir and that rare thing a serious satire that makes you sit up and think. The greatest and most underrated film of a couple of years ago.

In a couple of years’ time, will we have seen more novels from you?

God willing. There’s all those gems in that bottom drawer, remember. As well as the crime noir currently being edited, I also have a draft of another novel and scribbled notes and rough drafts for at least three more.

Of course, they all have problems that need solving first, but it keeps me off the streets.

Charles Harris is an international award-winning writer-director and a highly-respected script consultant, writing and directing for cinema, television and theatre. He is also a best-selling non-fiction author with titles including A Complete Screenwriting Course, Police Slang, and Jaws in Space. Several of his short stories have been published, with two shortlisted for awards.
Charles has a black belt in Aikido and teaches police, security personnel and the public, self-defence against street violence, including knife attacks.
He has a wife and two cats who live with him in North London and two sons who don’t. 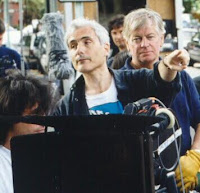 To find out more about Charles here are some links: