Highlight of the month - Newton Thornburg.
Hopefully as a parent, I never experience the loss of a child. I've two other books by Thornburg to get to at some point - Cutter And Bone and Dreamland. If they are half as good, I'll be happy.
Published in the 70's, not sure if it's in print or out of print, but if you cross paths with it, check it out.

Elmore Leonard was okay, not outstanding. I'm fairly sure the main dude - Jack Ryan appears in some of his others books.

My wife read the Linwood Barclay and I have a tendency to read her books after her, so we can share some learned discourse over the dinner table, though for the life of me I can't remember what we might have talked about in respect of this.

I'm fairly sure I bought the Warren Ellis book on the basis of some internet blog hype and megablurbs, but even though I've checked it out on Amazon a minute or two ago, it couldn't have made that great an impression on me because I can barely remember it. Nice cover though.

My son read these two Pattersons and passed them on to me. Not a total waste of time, but I don't think he'll be winning any Booker/Nobel/Orange/Edgar prizes, assuming he qualifies.

Healy and Williams, Williams and Healy....... can't remember, though the Healy book is the first in a series featuring John Francis Cuddy,


GM Ford – Who In Hell Is Wanda Fuca


Two outstanding candidates for book of the month - Citizen Vince and Death By Hollywood. It’s a shame that Bochco hasn’t written any other books, I keep checking from time to time but no cigar. Walter has written more, most of it on my TBR pile which is something to look forward to. I’m playing catch up so I’m not going to go into any detail on these two efforts, but suffice to say I’d recommend them to anyone and if time allowed I’d re-read the pair of them.


Pelfrey’s HH – not sure if it was a novelisation of the film or an original that spawned the film, either way........hmmm okay.


Sawbones, I feel sure was a Quick-Read and as such was quickly forgotten.


Wanda Fuca was the first in a series about an investigator, Leo Waterman based in Seattle........okay and I’ve got others in this and his second series of books with Frank Corso. Having read one of each I’d prefer the Corso titles, but I didn’t feel I’d wasted 8 or 10 hours of my life that I’d never get back.


Hugh Collins is a Scottish ex-con, who turned to writing. As well as an autobiography he’s written a couple of novels, or was it the other way round? This wasn’t too bad, I struggled in a few places with it but it was a 1000 times more readable than James Kelman.


Paul Thomas is a journo based Down Under. This crime fiction tome was the first of 3 about a Maori detective in New Zealand. The second won Australia’s Ned Kelly Crime Writing Award.  Humorous writing style a la Carl Hiaasen. Worth a look if you come across any of his books, but you won’t find them on any “100 of....” list, and they probably won’t be on too many people’s bucket list either.


Elmore Leonard – A Coyote In The House


Highlights, typically any book by Pelecanos has to be a good thing, but this wasn’t particularly stand-out in comparison with some of his previous work. I’ve just read an online review of this book to refresh my memory and that still didn’t set off any alarm bells in my head.


Sad to say, that a slightly average Pelecanos book was the best of a mediocre bunch.


Cruz Smith’s book was picked up from a charity shop years ago, after enjoying Gorky Park. Fair to say his story-telling abilities improved over time, but I’d stick to Renko if I was you. I have got his other “Gypsy” book somewhere in the loft which doesn’t exactly thrill me.


A couple of the books I read, I’ve subsequently seen on lists of the “best 100 novels” ilk.......books to be read before you die apparently.


Two boxes ticked on the aforementioned 100 books list, but I wouldn’t be too surprised if either cropped up on the list of “100 Books You Must Read Because You’re A Lemming Who Follows The Crowd.”  Or “100 Most Over-rated Books Of All Time!”


Usually Elmore Leonard serves up a treat and I’d probably read his shopping lists if they were published. Can’t say this was particularly magnificent but in his defence it wasn’t written for me, it was his first foray into the world of children’s books.


Wolff’s account of his time in Vietnam and post-Vietnam wasn’t too bad, but I’ve read better, either Tim O’Brien or Philip Caputo to mention a couple.


Joe Queenan’s America was a bit of a diatribe on popular American culture, Cats – The Musical, Kenny G, etc etc. (I looked this up because nothing had stuck, I initially thought it had been a bit of a travelogue but I was wrong.)

In the main I'm going to pen a few words on a book after I've read it and I've analysed what I felt about it, but before I get up to speed on that I'm going to lay down what I've read in the past couple of years.

10 books read in the month which was a decent start to the year - I tend to go for quantity over quality, as in my opinion you appreciate the really stand out books more.

What can I recall about these?
Not much truth be told, which means they either didn't make much of an impression on me, or I'm getting to the age where my memory is getting worse - probably the latter.

Phillip's Jook has I think been re-issued in the past few years and has rave reviews around the net. I thought it was pretty good though it didn't rock me.

The two I enjoyed the most were Want To Play, apparently the Tracy's are a mother/daughter collaborative double act and Ablow's Murder Suicide. I'd have to re-read or flick through them to remind myself what it was that I enjoyed so much.

Tom Kakonis blew me away with his first book, Michigan Roll. He didn't quite hit the same high mark here, but he's one of those forgotten or neglected authors I'd recommend to anyone.

The Block and Hamilton books were series books - the 1st Scudder, and the 3rd McKnight.
I'll probably re-read the Block/Scudder tome as it is part of a 3 book omnibus edition I have.

Stark's Butcher's Moon, I read at this time as much for the story as for being able to flog it on e-bay afterwards for £25-30, which then no doubt freed up more cash to buy more books.

Fauser's Snowman was an attractive Bitter Lemon Press edition which dragged in places.

With the exception of Fauser, I've got more to read on each and everyone of these authors.
No doubt I'll get to them at some point in the next 20-odd years!

Approximately 2000-2500 books in my attic, my reading pace varies from 80-120 a year, dependent on how much life interferes with my reading. I'm in my late 40's, so by that definition I have enough to read until I'm in my early to mid-70's - assuming I stop buying, which is incredibly hard to do.

Over the years my tastes have moved from horror - King, Koontz, Barker etc to an interest in Vietnam War books, both factual and fictional, to crime, to spy fiction with the odd bit of literature and sports biography thrown in.

I used to keep everything I read, perhaps an inherited hoarding gene passed onto me by my father, though now I read them and move them on - the ultimate aim being to get down to zero books so that my kids won't have to deal with 10 tonne of old tat when I pass on. 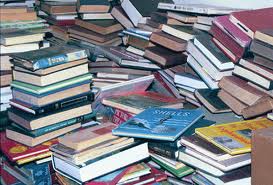 Most of my "collection" is classed as mount TBR, though I have read some of what is now stashed in the attic. I'll hopefully read them all once or once more, pen a few thoughts on the last one read and get stuck into the next.
Posted by col2910 at 01:00 4 comments: