CHARLES RIVER EDITORS - LEGENDS OF MUSIC: THE LIFE AND LEGACY OF TUPAC SHAKUR (2012) 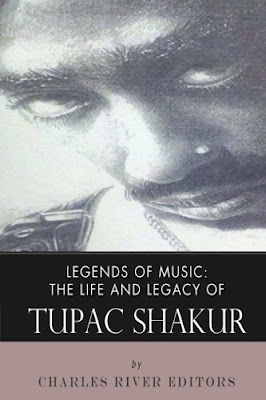 *Includes a Suggested Playlist of some of Pac's lesser known songs.

*Discusses both the New York shooting and Las Vegas shooting in detail, explaining who was likely responsible for the shooting.

*Discusses the beefs during Pac's life and the various conspiracy theories surrounding his death.

At the renowned Coachella music festival in 2012, crowds looked on with awe and stunned silence as the world’s most famous rapper took the stage to deliver a fiery performance of two of his well known hits alongside friend and former collaborator Snoop Dogg. The legendary Tupac Shakur had just overshadowed every other performer at the festival, despite the fact he’d been dead for over 15 years.

The “2Pac Hologram” was only the latest buzzworthy headline that Tupac has generated long after he was infamously gunned down just off the strip in Las Vegas back in September 1996. Since his death, Shakur’s estate has released far more music posthumously than Pac released in his all-too-brief career, amazing fans and music critics alike. In addition to the music that still keeps finding the light of day, the hologram performance was another fitting example that music fans continue to refuse to let him go, with some even going so far as to speculate that he faked his death.

Why does Pac continue to hold such a high place in pop culture among anyone who grew up in the last 40 years? The answers can be found in his turbulent life, unsolved murder, and the fact that most of the topics of his music continue to be relevant today. Born to a single mother who later developed an addiction to crack, Pac’s childhood was marred by constant moving, living in squalor, and eventually being homeless as a teenager in “The Jungle”, Marin City. Always a fan of performing, Pac channeled his rage, energy, and charisma into a rap career, fueled by his inability to forget how he grew up and the social ills he witnessed.

Rising from roadie for Digital Underground to his own spectacular single career, Pac rode his controversy and classic music to the national forefront, becoming front page news for both his arrests and hit records. Becoming the first man to have a #1 album while in jail, Pac was eventually bailed out by Suge Knight, CEO of Death Row Records, and from 1995-1996 became rap music’s biggest name. He would release the first original double CD in rap history with All Eyez on Me in February 1996 and the classic Makaveli album, recorded and produced in just a week, in November 1996. Both went #1, but Pac wasn’t around to see Makaveli’s success, having been infamously gunned down after a Mike Tyson fight on September 7, 1996 in Las Vegas. His murder remains unsolved.

Having become a rap icon cut down in the prime of his life and career, with the music to match the story of his life, Pac’s name and legacy are sure to endure. Legends of Music: The Life and Legacy of Tupac Shakur details the life, career, and legacy of the world’s most famous rapper, detailing how his upbringing shaped his philosophy and music, the theories surrounding his death, the conspiracy theories that he faked his death, and descriptions of Pac in the studio.

Learn about Tupac Shakur like you never have before, in no time at all.

A bit of a departure from my normal reading (or listening) with this short offering on rap legend Tupac Shakur.

Did I enjoy it? Did I learn anything? Was it a waste of my time?

A few snippets ie I never knew Shakur was friends with Jada Pinkett Smith, though I'm not quite sure what good that bit of trivia is ever going to do me.

No, I don't ever regard as time spent in a book as a waste of time. I have been considering trying to introduce more non-fiction into my reading, so it's a small step in that direction. That said, towards the end when Shakur's unsolved killing is discussed you have fact, blended with the speculation and gossip and conspiracy theories.

I think what it might force me to do is visit You Tube for a sampling of some of his better known songs, none of which I can claim familiarity with by virtue of title alone. Maybe I'll recognise them if I listen to them.

Sad when lives end abruptly and prematurely and in this instance from a gun. Sad for the victim, sad for the friends and family. No winners.