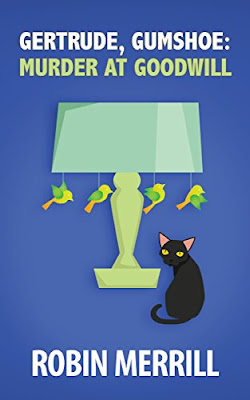 Gertrude is back! When she finds a murder victim at her local Goodwill, she tries to tell the Sheriff's Department everything she knows. Of course, they don't listen. So of course, she must solve the mystery herself. And the only way she can figure to do this is to go undercover—as the Mattawooptock Goodwill's newest team member.

Anyone who knows Gertrude knows this probably isn't the best idea. She'll probably get fired. Or arrested. Or worse.

Another January day, another Audible read and another cozy mystery from Robin Merrill, featuring her geriatric amateur PI, Gertrude. This one is the second in the series after Introducing Gertrude, Gumshoe.

Probably not the most enjoyable book I've consumed, but far from the worst. Gertrude is shopping at her local Goodwill store when a woman is brained on the head with a heavy lamp. The police are called. The shop is locked down with staff and customers alike. Somewhat inevitably it falls upon Gertrude herself to catch the killer and after a few days blundering around.... taking a job at the store, stealing and crashing a fork lift, breaking and entering ... she comes up trumps.

Some of the books I read, my expectations are set higher than other. Here I was after something quick, not too complex or taxing mentally, a few chuckles and a coherent narrative with a plausible mystery. I think a retired, feisty, awkward old gal as an amateur PI solving a murder (or several if you're writing a series) might be a stretch of the strains of believability, but really isn't all fiction?

I did think it a bit strange that the author felt the need to apologise to staff and customers of Goodwill stores, either in the introduction or afterwards (I forget which), for setting her story where she did. No offence was intended. None taken here, but do we need to apologise for everything these days?