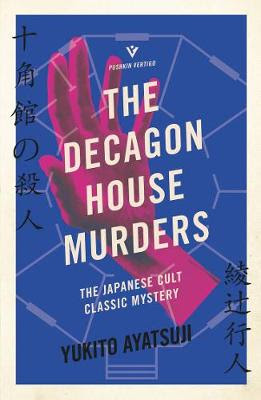 Synopsis/blurb.....
The Japanese cult classic mystery
'Ayatsuji's brilliant and richly atmospheric puzzle will appeal to fans of golden age whodunits... Every word counts, leading up to a jaw-dropping but logical reveal' Publishers Weekly
The lonely, rockbound island of Tsunojima is notorious as the site of a series of bloody unsolved murders. Some even say it's haunted. One thing is for sure: it's the perfect destination for the K-University Mystery Club's annual trip.
But when the first club member turns up dead, the remaining amateur sleuths realise they will need all of their murder-mystery expertise to get off the island alive.
As the party are picked off one by one, the survivors grow desperate and paranoid, turning on each other. Will anyone be able to untangle the murderer's fiendish plan before it's too late?
Another read which reminded me of the Agatha Christie book, And Then There Were None, despite not having read it. Last month it was An Old-fashioned Mystery by Runa Fairleigh (aka L A Morse). This time we have a Japanese setting for Yukito Ayatsuji's The Decagon House Murders.
A group of friends, part of a mystery readers club, depart for a week long trip to an island, which was the scene of a tragedy a year ago, when four people perished. The details of the incident are murky. The popular theories concerning the event are; the gardener who is still missing murdered four people, set a fire and vanished, or alternately, the owner of the house murdered the gardener, passed his corpse off as himself and then fled.
The visitors from the club aren't seeking to investigate the tragedy per se, just spend some time on the island, have a snoop around, do some writing and agree on their next magazine. They have a week before they are due to be picked up.
Inevitably, the members of the club start getting killed in the Decagon House, one by one, and as the number of victims increases, the number of suspects diminish, until eventually we are left with one.
On the mainland we have a couple of club members, not on the trip discussing the original events on the island and the untimely accidental death of a fellow club member which also happened in the past year or so. These members have received anonymous letters which are interpreted as threats. The belief is the other club members on the island have also received them. An amateur investigation of sorts starts, with the two guys travelling around interviewing family members connected to the original tragedy..... the gardener's wife and the brother of the guy who died on the island or who faked his death. Theories are constructed for the events of the past.
It's quite a quick read, with chapters alternating between events on the mainland and happenings on the island.
It's quite a clever book and I was taken by surprise at the outcome. So I enjoyed the mystery aspect of the book and also the rationale behind the crime. The motive was plausible and the manner and method of events believable for the most part.
I think for a book to elevate itself above and beyond - it was okay, I enjoyed it, I wasn't bored - status, it has to do several things for me. There needs to be an interesting story getting told. The writing needs to flow - no stilted, stunted, incomprehensible sentences that interrupt me and stop me turning the pages. The characters need to be interesting and I need to feel an emotional connection to several of them for the story to matter, be they victims or villains. The initial criterias were met, but as far as the characters were concerned, I just didn't feel anything for them. I didn't weep for any of the victims and neither did I share the killer's outrage and desire for revenge. On that level, I think it failed.
Overall, more to like than dislike. The assertion at the top advertising its appeal to GA mystery fans is one I would agree with.