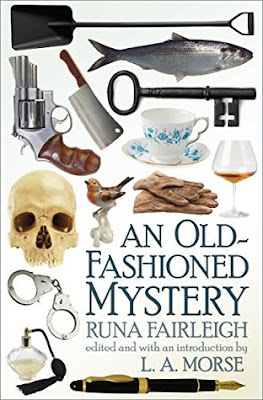 Ten guests have gathered at an isolated summer estate amid the Thousand Islands. The occasion is a surprise party to celebrate Rosa Sill's 25th birthday, the day she inherits the family fortune. But one surprise awaits them: the party quickly turns to a case of murder.

Violet Cornichon, the Society-Girl Detective, is on-hand, and it is up to her to gather all the clues and point them toward the suspects…or is that the potential victims. Because the killer is hardly finished with his deadly night, with bodies turning up, murdered in terrible and brutal ways. Which begs the old-fashioned question: whodunit?

--from the Introduction by L.A. Morse, Edgar award-winning author of THE OLD DICK

I don't read enough (any) GA type fiction to know the author's intention here, whether he's poking fun at the genre or paying homage. He's certainly having some fun, judging by the fact that he's put this out under a pseudonym and written the introduction to it under his main publishing name. Even if I'm unfamiliar with a lot of Agatha Christie's work, And Then There Were None springs to mind immediately.

A cast of ten on the island gets whittled down to one or none in fairly short order - I can't actually remember as to be honest I probably wasn't paying too much attention by the time I got to the end. I think I was probably bored and a bit tired of it long before the finish. Some books you get swept up in, other you count the pages or the % bar on the device.

Interesting premise, I suppose - though hardly original. There's a book within a book set-up at the start which I liked. The main focus of the book is an amateur detective who is a try hard. She fancies cracking the first murder, then the next, then the one after, as a means of getting some publicity which will rescue her ailing business. Every time she has a plausible theory and a suspect, the party she identifies is the next victim. She's also in competition with her brother, a man who she resents as he inherited the family fortune (a battle of the sexes type thing - with male entitlement and privilege coming to the fore). The fact that he has mostly squandered his inheritance is another strike against him.

Other characters...... a housekeeper, a cook, a lawyer, an old military man, a fiance, a hen-pecked wife and some forgotten others. Along the way there are or at least the possibility of an escaped madman murderer, hidden identities, illegitimacy, fraud and hidden treasure. Probably a few more things besides.

The conclusion when it came was a bit of a weird one.

It was a bit of a different reading experience from my usual fare and I'm undecided what I thought overall. I'm glad I read it though. Very different from the author's The Big Enchilada which I read and enjoyed a lot more a long long time ago.