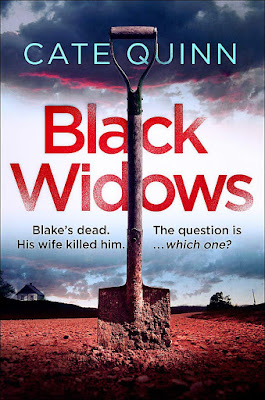 Synopsis/blurb...
Blake's dead. His wife killed him.
The question is: which one?
The only thing the three women had in common was their husband.
And, as of this morning, that they're each accused of his murder.
Blake Nelson moved into a hidden stretch of land - a raw paradise in the wilds of Utah - where he lived with his three wives:
Rachel, the chief wife, obedient and doting to a fault.
Tina, the other wife, who is everything Rachel isn't.
And Emily, the youngest wife, who knows little else.
When their husband is found dead under the desert sun, the questions pile up.
But none of the widows know who would want to kill a good man like Blake.
Or, at least, that's what they'll tell the police...
A cracking whodunnit from Cate Quinn with Black Widows, set against a back-drop of the Mormon faith and a somewhat unconventional family dynamic in Utah. One man, Blake Nelson and three wives, Rachel, Tina and Emily. Blake is dead and it looks like one of his wives has done it.
I liked the way the story unfolded with chapters alternating between the three wives and their perspectives on the situation.
Rachel ...the first wife, a troubled past, suppressed memories, secrets, obedient to a fault, naive and an innocent in the bedroom, jealous of her "two sisters"
Emily.... wife #2, the youngest, scatty, issues with intimacy, and at odds with her husband. She knows a thing or two about Rachel.
Tina..... wife #3, a former bad girl, found Blake and found some faith, a convert, a former addict and hustler with street smarts,
There's an ongoing police investigation into the murder with the likelihood that one of the above did it.
I liked how at varying times in the narrative my thoughts as to who the murderer was changed. The author did a great job in juggling all the balls and keeping me guessing. I liked the cops assigned to the case and their relationships with the women, at times levitating between support and an almost friendship to hostility and belligerence as they sought to solve the murder.
Gradually we learn more about the situation. Gradually the relationship between the three women changes from tense and resentful and jealous to one where they work together (mostly Rachel and Tina) to learn about more of Blake's secrets..... a possible 4th wife addition, a land deal, money issues, extended family relationships.... a lot of which he kept from the wives. We have a Vegas road trip with some bar-hopping as well as a raid on a church. It's all a bit of an eye opener for Tina.
I enjoyed learning more about the Mormonism and the splits and schisms over polygamy, which is still practised by a minority, but which is frowned upon by most. I got myself a crash course in their habits and values and the inequality between the genders. I liked the community apart from a community feel of the family of four and the friction and rejection of elements of them from the true believers - ie those more aligned with, for what of a better word, mainstream Mormonism.
I read this one in two days flat which considering its close to 450 pages long and one of those days was a workday, is testament to way in which I was absorbed by the story and the necessity to see what happens next. The multi-viewpoint worked well here, as you don't spent too much time in one character's head, so the perspective of the book changes frequently. No chance of boredom, or sense of drag. 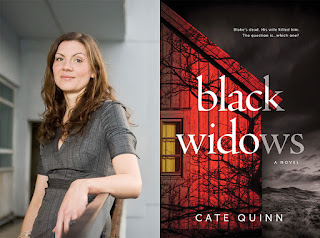