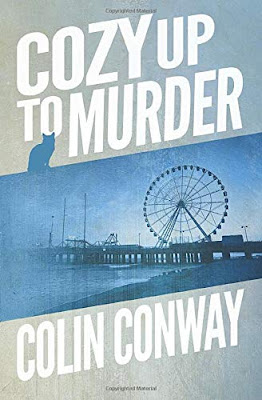 Synopsis/blurb....
Today is Owen Hunter’s first day in the coastal city of Costa Buena, California. He’s the new owner of Rockafellers, a vintage record store struggling to find customers. Much of that is due to Headbangers, a competitor with a better product mix and an aggressive owner.
There is also a local do-gooder group who wants Owen to fall in line with their vision for a kinder, gentler Costa Buena.
None of that worries Owen, though, because he is determined to be the number one used-music store on the boardwalk—even if that means stepping on a few toes. But when a murder occurs shortly after his arrival, he’s identified as prime suspect number one.
Owen Hunter must clear his name fast because he can’t afford to have a bunch of nosy cops poking around.
For Owen is a man with a secret that he must protect at all costs. The U.S. government has invested a lot to keep him safe, but his enemies will stop at nothing to find him.
Do prosperity and happiness await Owen in this coastal community?
The second in the author's three book Cozy series and another fast-paced, humorous romp with our ex-biker hitman turned snitch, now enjoying a life in witness protection and a second new identity after blowing his cover the first book - Cozy up to Death.
Owen, as he is now known, is a record store owner in a quiet Californian coastal town. A peaceful existence awaits. Yeah right.
A punch up with a competitor, a wheeler dealer hawking stolen goods, an attempted shakedown by some skateboard punks, a run in with a community busy body, a murder, a failed burglary, a suspicious cop, community activism fighting against an intransigent landlord, a cat, protests, suspicion. Owen's been in situ a few days and has already worn out his welcome.
Roll on book three - Cozy up to Blood and undoubtedly another town, another identity.
Good fun, decent pace, interesting characters, enjoyable setting, a murder mystery plot - not unduly convoluted or complex, but executed satisfactorily. Ticks in a lot of the boxes.