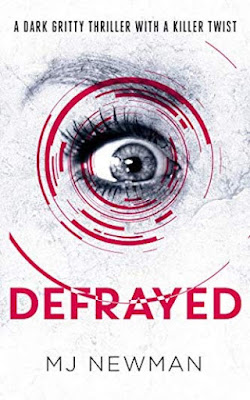 Martin Garrett had it all, or at least he thought he did. That all changed the day he woke up to a Dear John note from his wife. His twenty years of reinvention and hard work undone in the time it took to read a single paragraph.

If he thought his day couldn’t get any worse, he was wrong. Seems he can’t outrun his past forever, and now he has to pay.

One way or another the truth will out.

Join Garrett as he journeys into the abyss. A man at war with himself, raging against the world.

Fast-paced and tough, with a main character combatting a few issues, the least of which is his wife giving him the heave hoh. However bad that is, Martin Garrett's life has just taken a further turn for the worse. He might be going down, but not without taking a few casualties with him.

I really enjoyed this tale of one man's woes. Our main character in the space of a few days, deals with some marital woes full on, revisits some old haunts and finds himself reminded of a past and a father he tried to forget, has a few issues with his boss at work that he is unable to suppress and contain any longer, finds a new lady and brings himself to the attention of a local gang of criminal scrotes, while getting stalked by a policeman.

Busy, brutal and very satisfying. I liked this one a helluva lot. It's not my first outing with Mark Newman. I like the directness of his stories which are backed up by interesting, developed characters whose woes and difficulties you become invested in. When Martin Garrett's story comes to a climax, Newman still delivers another twist.

Two of the author's earlier works have been enjoyed before - In For the Kill and Violence in the Blood. I look forward to reading more from him in the future.