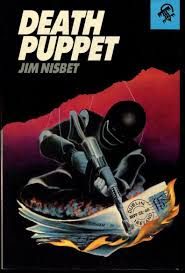 Synopsis/blurb....
Smart, bored, attractive and single, Mattie Brooke is a not quite over-the-hill waitress in the tiny town of Dip, Washington. She's lived all but one year of her life in Dip, and not much of what goes on there escapes her eye. But then, not much of what goes on in Dip is worth noticing. Not much, that is, until a traveling salesman named Tucker Harris drifts into town. Mattie cuts out on her steady guy just long enough for this stranger to introduce her to his bizarre brand of safe sex, and after Tucker splits Mattie figures to go on with her life the same as before. Fat chance. What begins as sassy complicity in a capricious tryst triggers a subtle and vertiginous slide into hell, with no stops for beer or introspection. A hell so deceitful and complete that, less than one revolution of the earth around the sun later, Mattie suffers the horrible revelation that there will be no saviour capable of rescuing her sanity - let alone her life. In the darkness of this devastation it seems the best she can hope for is a mercifully swift termination ...
But wait. There is one possibility. It won't of course come for free. Nor is the price her soul, not that. Merely everything in it.
"There'd been a woman in this room when last he'd been conscious. Why so there was, sqealed the little devil, who now began to tune the surface of Tucker's cortex, stretching its surface like the skin of a kettle drum, by means of hidden software burnbuckles, to raise its pitch, which was the voice of the devil itself, and testing it with a pair of crusty mallets, unspeakably atrophied shrunken heads mounted on the tibia of Cesare Borgia."
Death Puppet was my second outing with author Jim Nisbet about eight years after enjoying his thrilling Lethal Injection. I had a few WTF moments, both at the beginning and close to the end, but otherwise I really liked it.
At the start I did wonder what I was letting myself in for with a few pages, suffering some French poetry. Towards the end I don't know if I lost track or wasn't paying close enough attention, but I didn't know if I'd landed in some kind of sci-fi western as some strange goings on confused me. Maybe the little devil in Tucker's head was doing similar damage to my own?
Other than that, it was pretty damn good.
A woman meets a strange man. He meets her fish. He leaves the next morning. She goes to work. Meets two other men. Quits her job. Goes with the men to her on/off boyfriend's where something unexpected is going on. The strange man from earlier is known to the boyfriend and her two companions, a situation which fills her with dread. Over the next few hours, madness and mayhem ensues. Not everyone survives. She gets her job back.
I liked the connectivity between the characters. I enjoyed the fact that I didn't know initially what was happening. I liked the back story of the boyfriend and his parents and his mother's letters. I liked the woman's painfully acquired knowledge that her hopes and dreams of a particular future would never be realised, that she didn't really know her man at all, that the window of opportunity for a much more fulfilling life had escaped her..
I loved the scene with the stranger and the woman and the fish - turbo charged with electricity and sex and death and eroticism. I loved the scene in the cafe with the regular customer and the owner and his shotgun and their confrontation with the two hippies and Mattie and a coffee pot.

Strange, interesting, entertaining, at times weird. Nisbet did irritate me at times with his big incomprehensible words, liberally sprinkled together in clusters ..... concatenation, thanatophage, contumely.... nope, not tempted to look them up.
Overall 4 from 5
Hopefully I'll read one of the other ten or so Nisbet's on the TBR pile before another eight years has passed.
Read - February, 2021
Published - 1989
Page count - 244
Source - owned copy
Format - hardback
Posted by col2910 at 06:18