Another tub of 50, all male authors with a sprinkling of non-fiction.


Ex-con, professional poker player Timothy Waverly travels to Traverse City, Michigan for a break... and falls into bed with a seductress named Midnight. She's an out-of-towner, too, there to rescue her self-destructive brother, who has stupidly ripped off a fortune in cocaine from a vicious Chicago mobster. Now she is being chased pursued by Shadow, a hemorrhoidal hitman who gleefully specializes in torture and rape, and Gleep, his muscle-bound henchman. The odds are stacked against her, but Waverly is a gambler who knows how to play them...

"Original, brutal, nightmarish. Kakonis is a sharp new gambler in the literary crap game. He just takes the pot,"
The New York Times


Brooding, edgy, and sometimes violent, Controlled Burn's loosely linked stories are each in some way a distillation of hard time -- spent either in prison, the backwoods of Vermont, or the badlands of the American West. Peopled by boxers, drunks, truck drivers, murderers, bounty hunters, drifters traveling under assumed names, and men whose luck ran out a thousand miles ago, these stories feel hard-won from life, and if they are moody and stark, so too are they filled with human longing.

Controlled Burn is divided into two sections: "The Northeast Kingdom" and "The Fugitive West." In each, Scott Wolven reveals a broken world where there is no bottom left to hit. In the haunting "Outside Work Detail," convicts stoically dig graves for their fellow prisoners yet reserve their deepest grief for the senseless death of a deer. "Crank" introduces Red Green, a maniacally brilliant addict who brews his own crystal meth in a backwoods lab, and whose high-energy antics inspire both cautious admiration and mortal fear in his business associates. In "Ball Lightning Reported," Red Green's ultimate fate is revealed. In "Atomic Supernova," a revenge-obsessed sheriff deputizes a known cop-killer to help him hunt down a counterfeiter and drug lord. The unexpectedly tender and heartbreaking "The Copper Kings" concerns a father facing the dark truth behind his son's disappearance. And in "Vigilance," a hunted man struggles to escape his past, always yearning for an honorable yet perhaps unreachable future.

Powered by a spare, ruminative prose style that recalls the best of Denis Johnson and Thom Jones, Controlled Burn is an unforgettable debut.

Personal, lyrical, and extraordinary, Patches of Fire is a memorable exploration of the black soldier's experience in Vietnam, the plight of the Vietnam veteran, and the redemptive power of writing.

With the same passion for truth and stunning honesty that marks his highly acclaimed fiction, Albert French's remarkable memoir tells the story of a young man's encounter with a war and with deaths beyond his understanding; of his return to a country torn by racial unrest in the wake of the assassination of Martin Luther King, Jr., and of his painstaking efforts to defeat his inner demons and make a place for himself as a black man in white America.

With a starkness tempered by humor, French brings to life the horrors of Vietnam, and recounts in compelling detail his uneasy tenure as a newspaper photographer, his heady days as publisher of his own magazine, his confrontations with the ghostly images of Vietnam that haunted his dreams--and the sense of renewal and purpose he achieved as a novelist.


Frank Machianno is a late-middle-aged ex - surf bum who runs a bait shack on the San Diego waterfront when he's not juggling any of his other three part-time jobs or trying to get a quick set in on his longboard. He's a stand-up businessman, a devoted father to his daughter, and a beloved fixture in the community.
Frank's also a hit man. Specifically: a retired hit man. Back in the day, when he was one of the most feared members of the West Coast Mafia, he was known as Frankie Machine. Years ago Frank consigned his Mob ties to the past, which is where he wants them to stay. But a favor being called in now by the local boss is one Frank can't refuse, and soon he's sucked back into the treacherous currents of his former life. Someone from the past wants him dead. He has to figure out who, and why, and he has to do it fast.
The problem is that the list of candidates is about the size of his local phone book and Frank's rapidly running out of time.

And then things go really bad.

Tale of a pathological killer at large in a quiet Scottish community.

For Joe, the summer of 1977 meant punk rock, fun and violence. Fast forward to 1988 and Joe is on the Trans-Siberian express coming to terms with his best mate's suicide back in 1977. In the present, Joe still has to come to terms with Smiles's death.

With a hot blonde and two million in cool cash on the line, small-time hustler "Tone" Nello is ready to score. But there are those out there willing to make sure the only thing Tone scores is a bullet. On the mean streets of Chicago there are plenty of crooks, and when they killed George's father they made a big mistake. Now he is after revenge from Tone--tooong man.

"Right up there with Elmore Leonard and Ed McBain".--Chicago Sun Times. 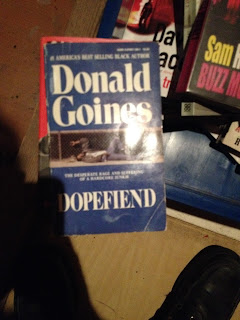 For twenty-three years of his life Donald Goinse lived in the dark, despair-ridden world of the junkie. It started while he was doing military service in Korea and ended with his murder at the age of thirty nine. He had worked up to a hundred dollars a day habit and out of the agonizing hell came Dopefiend! It is the shocking nightmare story of a black heroin addict. Trapped in the festering sore of a major American ghetto, a young man and his girlfriend- both handsome, talented, and full of promise- are inexorably pulled into death of the hardcore junkie!

LOWLIGHTS....... Not sure I want to read David Baldacci to be honest. Everything he writes seems to be the size of a housebrick - as I keep telling my wife "size isn't everything"