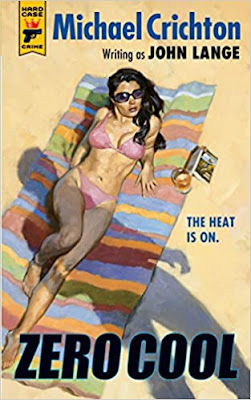 Synopsis/blurb....
American radiologist Peter Ross just wanted a vacation. But when he meets the beautiful Angela Locke on a Spanish beach, he soon finds himself caught up in a murderous crossfire between rival gangs seeking a precious artifact.
From Barcelona to the rain-swept streets of Paris, from the towers of the Alhambra to its darkest catacombs, Peter Ross is an ordinary man in desperate circumstances; racing to uncover a secret lost for centuries, before he becomes its next victim.
Not a massive fan of science fiction type novels, I've managed to avoid Michael Crichton's books forever. Here though we have some 60s pulp type adventure stuff, which had originally been published under a pseudonym. Hard Case Crime brought seven or eight of them back into print and I'm glad they did.
An American doctor takes a holiday in Europe and finds himself caught up in some international intrigue....... death threats, autopsies, smugglers, criminal rivals, a beautiful girl, sex, some espionage type shenanigans with Peter Ross the unwitting piggy in the middle, slowly catching on to the jig.
240 pages long it was a one sitting read. Memorable, ground-breaking, literary? Not really. Entertaining, absorbing, fun? Definitely.
I liked the main character and the run around he gets. As a doctor, he's obviously intelligent, capable and practical. In worldly matters and on a foreign continent, initially he's a bit naive and bewildered. Very quickly he wises up.
I quite liked the European road trip - who wouldn't want to visit Paris and Barcelona?. I liked the time when the book was written and when it was set, the swinging sixties, the time of sexual liberation with women not afraid to express themselves. It's hard to say whether the sex here is used as a weapon, or because the beautiful Angela is attracted to Peter. Initially the former, but probably a bit of both and in any case probaby not worth too much time fretting over it.
Fun was had. I'll definitely read more of Crichton's John Lange books in the future.
4 from 5