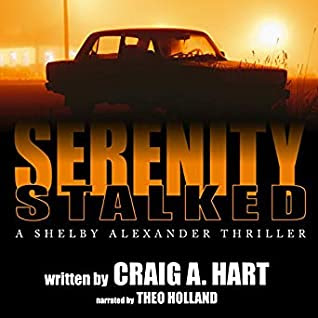 SERENITY STALKED: A cold-blooded killer has blazed a trail of dead bodies across the country, with no one to stand in his way...until he starts killing on Shelby Alexander's home turf: the small Michigan town of Serenity. The second book in the Shelby Alexander Thriller Series, Serenity Stalked takes readers inside the mind of a terrifying killer. The stakes have never been higher.

My second time with Craig A. Hart and his Serenity series featuring retired boxer, Shelby Alexander. I'm not usually one for cold-blooded killer books, but I really enjoyed this one, aided in part by the fact it was narrated by one of my favourite Audible book guys, Theo Holland.

It's been a few months since I listened to it, so a lot of the details have deserted me. Alexander's girlfriend becomes a target for a nomadic killer. A different guy who had been harassing her, gets killed after Shelby had visited him, so Alexander is in the frame for that. The girlfriend gets kidnapped, the killer/kidnapper is living out a head fantasy where they are a live happily ever after couple, tension mounts etc etc, tables get turned, a twist or two, everyone does indeed live happily ever after except for one.

I don't mean to be flippant. I did have a good time listening to this one. Decent story, with an interesting, sympathetic main character, a reasonable pace, but not to the exclusion of character development - main and support cast or back story elements. I was happy with the outcome of the book and I want to read more from the author in the future. What else do you need?

Serenity has been enjoyed before. I think the series currently runs to eight books.