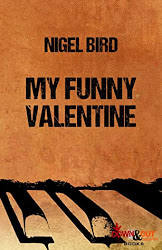 Synopsis/blurb....
Double Dutch loves playing Cupid and for one lucky lady his arrow will be painfully sharp. Only the police can prevent him from hitting his target before Valentine’s Day comes to a close.
It’s almost twenty years since the last Double Dutch killing and he’s back with a vengeance. The discovery of his latest victim resurrects ghosts the police hoped they’d laid to rest forever.
With Valentine’s Day almost upon them, detectives know they have limited time to avoid another slaying.
Follow DI Wilson and his team as they try to locate the killer before he strikes again.
My Funny Valentine is the second novel in the highly-praised Rat Pack series
The second book from Nigel Bird's Rat Pack series after the highly enjoyable, Let it Snow from 2019. This one features the same team of detectives and uniformed officers as the previous book. Again, we have more than one case or problem to solve, though the secondary issue is more of a personal family nature for one officer than an on-the-books case. A younger relative has gone off the rails slightly and needs extricating from a difficult situation involving a local gang. Some familial and community action of a somewhat unorthodox manner is called for.
The main focus of the book involves an old, elusive foe from years ago - the Double Dutch killer, who after a long period of inactivity is back on the team's patch and killing again. His previous victims all perished around Valentine's Day and with this year's February date fast approaching, there is an urgency to capturing Dutch before the inevitability of another victim. Somewhat frustratingly for the team, the killer was fleetingly in their custody, before a distraction saw him released.
I liked catching up with some familiar faces from the last book. There's enough time devoted to events and issues involving the character's outside of the job, in addition to the investigation..... we have family issues (mentioned above), problems with unruly offspring at school, which spills over to causing domestic tension with a partner, and there's a romantic situation possibly being taken to the next level given the time of year.
On the investigative front, there's almost a cold case feel to it as the original investigation needs re-examination, in addition to the current timeline. Florists, flowers, DNA, overseas police cooperation, identification, interviews, an Australian dimension, surveillance, football, crowds, CCTV, taxis, targeting of a specific victim, collateral damage, and a somewhat surprising resolution.
Overall, I really enjoyed this one. It's a busy book, lots going on with a plethora of interesting characters and situations, but it's always under the author's control. There's plenty happening, but not too much. Another plus for me is the length, the text of the prose comes in at about 220 pages which is just long enough to develop the plot with back story flesh, but without padding things out.
Decent storyline, enjoyable setting and a satisfying outcome.