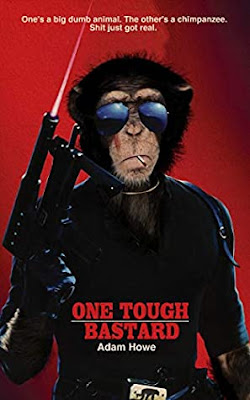 Shane Moxie: A washed-up 80s action star who refuses to believe his best days are behind him... Duke: A hyper-intelligent chimpanzee, and arguably the greatest animal actor of his generation... Reunited for an anniversary movie screening, when Moxie and Duke are targeted by assassins, the feuding co-stars reluctantly join forces to smash an organized crime syndicate headed by an iconic German action star dealing death from his movie-themed fast food franchise...

One's a big dumb animal, the other's a chimpanzee: S**t just got real.

From Adam Howe, writer of Tijuana Donkey Showdown, and Die Dog or Eat the Hatchet, and the winner of Stephen King's On Writing contest, comes a 'buddy' action/comedy in the tradition of Lethal Weapon, 48 Hrs, and Tango & Cash. Buckle up for the Ready Player One of 80s/90s action movies. One Tough Bastard will turn you into a goddamn sexual tyrannosaurus... just like its author.

Probably the funniest book I have read in the past 12 months, and I doubt anything will top it in the laugh out loud comedy stakes for the rest of this year. That said there's a lot more going on in One Tough Bastard than the author showing off his comedy props.

A fast moving story full of action set against a backdrop of Hollywood films, with an over-the-hill lead man with a career in terminal decline, a simian-human romance, bad blood and a chequered history, and an unlikely double act pairing trying to take down a drug smuggling ring in between having a plaster cast dick mould taken. Bad guys, good guys, a lead guy with a total lack of self awareness and all the funnier because of it. You've got to love a man rocking a mullet!

You might think the absurdity of the premise - an acting chimpanzee, complete with a Kevin Spacey sounding voice box and a full on romance with a lovely lady (pre-bereavement) as half of an investigative double act - might fall flat on its face due to the absolute ridiculousness of the set up, but actually no. Author Adam Howe had me convinced and rooting for our heroes.

Very, very good. Very, very funny. Hard to do it justice to be honest. 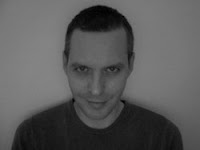 Adam Howe's work has been enjoyed before. Gator Bait back in 2015