1995: William Cowling, at forty-nine, is digging a hole in the garden of his ranch home. A hole for shelter, for solutions. After years of pent-up terror, he has finally found the courage of a fighting man, the courage to laugh in the face of his certain knowledge that the weapons of destruction massed all around us, and against us, must one day be unleashed. His story - including the lives of his friends and family, his lover Sarah and his wife Bobbi - is our own. His defiance of the insane intentions of our leaders could also be ours.

THE NUCLEAR AGE takes on our supreme unacknowledged terror, finds its lunatic core and transforms it into a moving and courageous story that speaks of, and to, an entire age: our own, our nuclear age. It is a fiercely inventive comic fable for our time.

A re-read maybe 30 years after I initially read this one. I first discovered Tim O'Brien's work when in my Vietnam War reading phase. I read a couple of fantastic books by him - If I Die in a Combat Zone and Going After Cacciato. Ergo, hoover up everything he ever wrote and keep an eye out for new books from him. Well that's what I did.

The Nuclear Age has at its heart a subject that if I'm honest I think about now a lot less than I did during my teenager years of the 70s and early 80s ...... the threat of nuclear war.

William Cowling at various times through the book ... is troubled by the thoughts of missiles flying over his head and world annihilation, makes a protective bunker in the basement of his parent's house comprised of an upturned table and graphite pencils, gets therapy at his parent's insistence, starts a high school/college protest movement against the bomb, snags the high school beauty, goes on the run when drafted for Vietnam, with his school friends and increasingly radical girlfriend joins a violent anarchist cell, receiving weapon's and military training while remaining non-violent himself, watches his father's funeral through binoculars while still a fugitive, works as a courier/messenger for the movement, falls in love with an elusive poetry writing air hostess who he pursues around the globe on and off until he eventually marries her, buys a mountain, sells a uranium rich mountain for a fortune (oh, the irony), and has a middle aged breakdown resulting in him incarcerating his wife and daughter under house arrest, while building a nuclear shelter in his front garden (or at least digging a big f-off hole).

It sounds weird as anything. The prose flicks backwards and forwards in time..... events of childhood, arguments with his daughter, college days, therapy, poems/notes from his wife, Vietnam dodging...

I think I liked it more second time around, maybe because I read it in a leisurely fashion - limiting myself to a chapter a day over the course of a month.

I enjoyed some parts of the book more than others, particularly the period concerning the draft dodging and the involvement in a counter culture movement while still remaining non-violent. I can't quite decide whether William was brave or cowardly.

Quite a thought provoking book which I liked overall. Not my favourite of his books but one which made me think about an important subject. One which I think I have become blasé about over the years, more so in the pre-Trump in the White House years.

My two favourites of his remain in the collection for re-reads at some point, as well as a few others of his that came after this one . 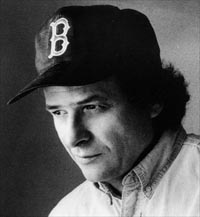