MIKE HARVKEY IN THE COURSE OF HUMAN EVENTS 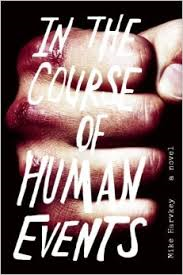 Synopsis/blurb…..
Battered, bruised, and bloodied by the economic collapse, Clyde Twitty has all but given up hope for the future. The factory has shut down, the pick-up needs repairs, and the place he calls home is the town the American Dream forgot. Right about now he could use some help. Enter Jay Smalls, a charismatic martial artist who exerts an intense magnetic pull. Under Jay’s brutal instruction, Clyde begins a series of increasingly frightening tests that draw him into a seedy underworld of bare-knuckle fighting, brazen criminal acts, homemade drugs, and homegrown extremism. Jay reshapes Clyde into a fearless fighter—and directs his burning anger at a deserving target: the government.

In this thrilling debut novel—equal parts satire and morality play—Harvkey shines a sharp light on the radical underbelly of the floundering American Midwest. As he traces the violent rebirth of a desperate man, he explores with unflinching acuity the ugly nature of hate, the mechanics of radicalization, and the atomic power of having someone believe in you.

We have a down-trodden protagonist; Clyde Twitty, who we are sympathetic to and are rooting for.  Clyde is unemployed with few prospects. He’s scraping a few bucks delivering cars part-time to auction. He’s trying to support his mother and his disabled uncle – Willy. His only friend has blown town for the bright lights of Nashville.

Alone, dis-affected and ripe for seduction; Clyde falls under the spell of Jay Smalls, a white supremacist and militant. Jay with his smooth patter and his corrupting philosophy enlists Clyde into his small band of fellow-thinking Aryan dunderheads.

As Clyde leaves behind his old life for Jay’s band, I was still rooting for him; still hoping that he could reverse his chosen path and get back to some rational thought and action. We had glimpses of hope when he befriends, Chetto – a Mexican work colleague at his new job in Jefferson City and spends time in the company of his family. We felt just maybe after visiting his uncle to say goodbye; that his family bonds would prove too strong to sever.

Enjoyable, interesting, deep, worrying and scary. Fascinating look at how unemployment and economic misery can be subverted from dis-affection with government into militant radicalisation, especially in an environment where guns abound.

Mike Harvkey hails from Missouri, which ticks another box on my USA State Reading Challenge. His website is here.