MIKE RESNICK - DOG IN THE MANGER 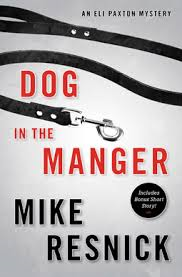 Hired to investigate the disappearance of a Westminster winner, Eli Paxton stumbles into a web of intrigue.

A dog is missing. Not just any dog. The number one Weimaraner in the country and current Westminster winner.

Down-on-his-luck private eye Eli Paxton is hired to find him. Not exactly an elite assignment, but better than nothing. Maybe it will help him pay his rent.

It turns out to be anything but a routine case. People start dying in mysterious ways, a cargo plane goes missing, and someone is taking shots at him. It makes no sense. Even a top show dog isn't worth that much.

Now the hunt is on. Paxton needs to find this dog to save his own skin. The trail leads to Arizona, then Mexico, and finally back to his hometown of Cincinnati—

Where he finds the startling solution.
Praise…..

"I did something I rarely do these days—I read [Dog in the Manger] in a single sitting. I think you'll do the same."
—Ed Gorman
Author of the Sam McCain mystery series

"Eli Paxton is a likable addition to the ranks of fictional private eyes. Mike Resnick's fast-paced, cleverly plotted, wryly amusing adventures are sure to please both mystery readers and fans of his award-winning science fiction."
—Bill Pronzini
Grandmaster of Mystery Writers of America 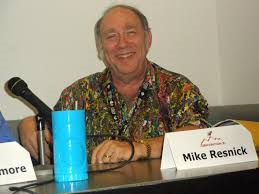 Another author here who I have vaguely heard of before, but as he is better known for his numerous science fiction novels, one I have never tried. This mystery was originally published back in the mid-90’s and has been given a new lease of life by Seventh Street Books. Resnick has written two more with Eli Paxton as the main focus. The second – The Trojan Colt was released last June and the third – Cat on a Cold Tin Roof will be published in August of this year.

Unlike a few other PI novels I have read, Eli Paxton has few personal issues dogging him. He’s well adjusted, fosters decent working relationships with the police and his competition. He has an interesting back-story which establishes him as an honest, conscientious investigator; unafraid of doing the right thing and without the obligatory bottle of JD in his bottom desk drawer. In his 40’s, single, overweight and balding and without a multitude of martial arts belts and hand to hand combat skills. Jack Reacher he isn't and for all his ordinariness, he rather likeable and more importantly for me, believable.

Paxton is hired to investigate the disappearance of a show-winning Weimaraner dog; Baroness, by the show handler, who is himself being sued by the dog’s owner for its disappearance. The dog was due to have been shipped back to its owner on a small internal flight from Cincinnati to Arizona but never arrived. Paxton makes inquiries at the freight handling operation and soon discovers that the mystery itself is linked to the flight……..employees at the company are transferred, a couple die in “accidents” and when visiting the dog’s owner to make inquiries at the other end of the chain, someone takes some pot shots at him.

Our missing dog case has morphed into someone somewhat larger and more dangerous for Paxton to unravel.

Only about 190 pages long, so this was a fairly quick read, but without the author sacrificing the development of the main characters within the book. Our settings for the mystery jump around and we enjoy a bit of Arizona and Mexico in addition to Paxton’s Cincinnati base. We have an involvement with the local police, in addition to some national agencies, as well as Mexican law enforcement and we get to learn a little bit about the world of dog breeders and dog showing and judging. Hmm….what a strange lot they are.

Lots to like and enjoy here and I’m looking forward to the second in the series sometime soon.

Thanks to Seventh Street Books for my copy of this.