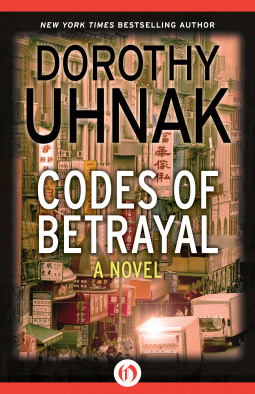 Codes of Betrayal is a drama of double cross and triple jeopardy. At it's center is Nick O'Hara, an NYPD member whose shifting family loyalties will ultimately force him to confront his deepest notions of honor, loyalty, and justice. The son of an Irish father and an Italian mother, Nick O'Hara has always been a loyal cop. His relationship with his grandfather, Mafia boss Nicholas Ventura, has been an albatross, but never an issue. Then, in a moment of carelessness, he sends his thirteen-year-old son, Peter, to spend the afternoon at a Little Italy street fair with his underboss cousin. Caught in an alley between Little Italy and Chinatown, the boy is brutally gunned down, a bystander caught between mob crosshairs.

First taste for me of Dorothy Uhnak, but not my last, as I have a few of her earlier books on the shelves. She featured her in a recent “2 BY” post.

Codes of Betrayal is her last published novel originally released in 1997. With a New York setting and an Irish/Italian family there’s a potential clichéd book in the offing. If I think New York Irish, my mind conjures cops. If I think New York Italian, I’m figuring family and Mafiosi. Uhnak delivers a book along those lines, but it would be unfair to write it off as formulaic.

We have a cop – Nick O’Hara; married with a son. He’s honest in his work, less so in his marital relationship fidelity-wise. There are tensions present; the job has taken its toll and as a couple they struggle to communicate. His upbringing since the death of his father, at the hands of his mob-connected Uncle, possibly on the orders of his Mafiosi grandfather has distanced him from the Italian side of his family. A family re-union brings Nick's son into contact with his cousin’s boy; a lad of a similar age. Disaster strikes and O’Hara decides to seek revenge on his grandfather.

O'Hara despite his cheating is a likeable character, with enough flaws and foibles to be realistic as opposed to a cardboard cut-out super cop. His grandfather and ultimately his nemesis - Nicholas Ventura - has virtues and positive attributes as well as the ruthless, heartless streak that keeps him entrenched at the head of his operation. He's both feared and respected. You do feel he has a genuine love and affection for Nick, in spite of his manipulative, controlling nature.

An interesting mix, decent plot, a couple of strong female characters – Nick’s wife who I felt we didn't see enough of and a childhood friend of O’Hara’s – Laura Santalvo – a lady I didn't particularly warm to throughout; so conversely felt we saw too much of!

Character, setting, plot, pace, conclusion – all ticks in the box, without being the best book I've ever read.

Another Net Galley acquisition (will I ever see the end of them?)

All of Uhnak’s back catalogue has been made available on e-book by Open Road Media – find them here!