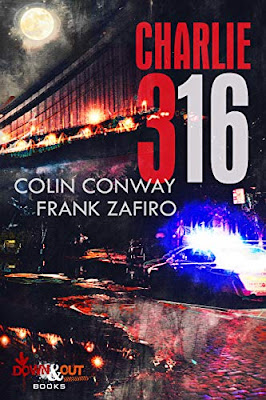 Tyler Garrett is a model SWAT officer whose good looks, education and familial status add to that image. The fact that he is a black man in the predominately white Spokane Police Department only adds to the city administration's pride in one of their own. He's often pointed to as an example of the department's best and brightest - a young man on the rise.

One summer evening, Garrett stops a reckless driver. It's something he's done a thousand times except this time, gunfire erupts from a nearby house. As Garrett dives for cover, the driver turns and begins shooting as well. Garrett survives the ambush by killing the driver and chasing off the additional shooter.

The legend of Tyler Garrett grows and the community rallies around him.

Until the initial investigation determines the driver was shot in the back and his gun has somehow disappeared. Suddenly, the police department, city hall, and even the national news media are wondering just what happened that night? In a nation where police brutality dominates the headlines, Garrett's case has suddenly become a flashpoint.

Now, Officer Tyler Garrett must take matters into his own hands. Time is quickly running out for him to find the second shooter and to clear his name.

Gripping, complex, layered, and an absolute belter from Colin Conway and Frank Zafiro.

From first page to last I was hooked and totally invested in this one. Plot, pace, character, setting and a resolution which while satisfying, leaves things unresolved as far as a few of the main players here are concerned.

Without wanting to go into too much detail, or in fact any regarding the plot, just when you think you know what's going on, the book takes off in a different direction causing you to reassess your previous assumptions.

I really enjoyed the dynamics at play, the politicking, the panicking, the eye of the storm, the efforts to control the story, the battle of wills between the mayor's office and his adviser with the police and the media; the in-fighting and suspicions between the mayor and his PR guy, and the mayor's assistant, the distrust and paranoia, the chess game with the department trying to think three or four steps ahead; the leaks, the unofficial briefings, the rivalries within the police, the inter-force cooperation, the scapegoating of the officer involved, the investigation, the publicity and the witch hunt and the accommodations, the compromises, the racial element of the case, the Dudley Do-right detective with the chip on both shoulders, the reporting, the assumptions, the pacts and the search for the truth.

I think this will be one of my top reads of the year without a doubt.

Never the Crime is the follow on to Charlie 316 and has just been published. I would say I'm really looking forward to it, but in truth. I've just finished reading it.