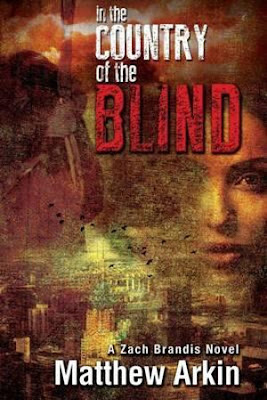 “A dead body is a lousy way to end a first date.”

So begins In the Country of the Blind, a modern noir tale that takes readers into the world of former attorney-turned building superintendent Zach Brandis. When Zach abandoned his promising legal career, it confused everyone, including himself. Now, with no apparent purpose in life, he has time enough on his hands to get into some very hot water.

When Zach takes Cynthia Hull to dinner, murder and a confrontation with the cops are the last things on his mind. But when he walks her home, he finds himself face to face with New York’s finest, who are investigating the suspicious death of the actress’s roommate and friend, Alex Penworth. Maybe it’s because Cynthia is beautiful and vulnerable, or maybe it’s just because the cops rub him the wrong way, but Zach steps in to shield her from their persistent questions. In the days following, Zach finds himself increasingly tied up in knots over the case, and what starts as simple curiosity may end up putting the former attorney in grave danger.

Captivated by the puzzle of Alex’s death, Zach begins to play with the pieces. When Cynthia’s apartment is ransacked shortly the murder, it becomes clear that Alex was hiding something, something of value to someone. Looking into Alex’s mysterious activities in the weeks before his death, more questions begin to emerge: Why was Alex fired from his bartending job? Why is a beautiful undercover narc hanging around the bar where Alex worked, and trying to keep Zach away? Why do the cops seem uninterested in the inconsistencies in Alex’s autopsy report? As Zach puts the pieces in place, a picture of the victim begins to emerge: Alex, another lost soul, plagued by his past and the demons of the cult he escaped — a man who, like Zach, abandoned a promising career to struggle as a going-nowhere actor/bartender. Driven by his feeling of kinship with the victim, can Zach discover what ultimately led to Alex’s death, and still get himself out of harm’s way before it’s too late?

A dark and witty tale in the vein of John Sandford and Lawrence Block, In the Country of the Blind is a true page-turner, suspenseful from beginning to end. This character-driven thriller will have readers on the edge of their seats, driven, like Zach, to uncover the secrets behind the gruesome murder.

A lockdown book and my first ever You Tube reading/listening experience, as the author uploaded a couple of chapters a week of him reading his way through the book. I quite liked the experience and it was a decent accompaniment to some otherwise mundane desk duty. There's a certain intimacy about the author himself reading his book to you.

The story involves a sudden death and our main character Zach, immersing himself in to the investigation of the demise of a total stranger, Alex. Once I kind of bought into why he would do that, I was interested enough to stick with the book.

There's a question over whether the death of Zach's first date's flatmate is suicide or murder and his estranged family seem willing to let it go as a suicide. It's obviously not and our man with too much time on his hands starts digging into the victim's life.

Family rift, a cult, a job loss, upset, anxiety, criminal employers, friction with the police, a new relationship going nowhere, Zach's history, Alex's story, a different police investigation, a beating, stepping on police toes, a feisty female cop and some sparks, a few more twists and turns and a resolution.

I enjoyed the story but wasn't especially blown away by it, if I'm honest. I think the motivation for Zach's involvement and therefore the whole premise for the book didn't really convince me. To be fair the author worked hard to provide reasons for such a course of action, but I think I just put myself in the main character's shoes and thought.... nah, CBA with that.

Apart from that everything else was enjoyable. I quite liked the main character. He's intelligent, principled and slightly annoying. The support characters were convincing. There's a lot of pain and grief which surfaces during the book and Zach's investigation manages to reopen old wounds for those who maybe haven't quite put the past behind them. There's also a manipulative, controlling bad guy who I managed to take an instant dislike to. I guess the author did his job in that respect.

There's a bit of action to raise the tempo and pace a bit, both in the form of an attack on Zach and between the sheets with his new maybe girlfriend. In the end there's a final twist which I hadn't anticipated but which I was happy for.

Overall more to like than dislike, though I'm undecided as to whether I would want to read more about the character, always assuming there's a second book.