Half a dozen added to the collection in May.... 2 from authors I've read before, 4 from newbies. 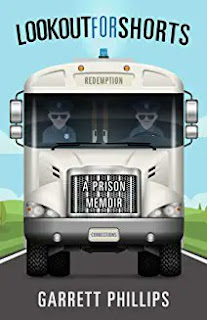 Garrett Phillips - Lookout for Shorts (2020) - reviewer copy from Book Sirens
A punt in the dark, but I do like prison tales...
An arrest and conviction for trafficking ecstasy can be comical. The character-strewn path of corrections that followed is entertaining and enlightening. This is the story of a "book-learnin' smart-ass" who endured a three-year minimum-security tour of the slammer and lived to make fun of it. And who emerged a humbled and better man.
Lookout For Shorts is a departure from hardcore prison fare; it is gonzo and humorous in tone. Picture the worst cruise ship imaginable, full of guests from The Jerry Springer Show, that never reaches a port. Tales abound of inmate absurdities and administrative follies juxtaposed against the coarse subculture of lockup. Along the way, Phillips unflinchingly describes his drug-dealing days, a rehab stint, and his misspent youth.
We've all heard of Orange Is the New Black, the fish-out-of-water story that provided a glimpse into a fascinating micro-society. Lookout is similar but zips several steps further into humor. The main hazard the author faced was his head exploding from being immersed in a sea of weirdos and misfits. The nuttiness nearly made him forget about the ever-present threat of losing teeth and suffering fresh scars.
Culled from copious journals, most of this tale is prison-based. The story begins with the arrest of a Generation X slacker, for dealing drugs at a jam band concert. Description of an upscale rehab stint and living in an AA-based halfway house follow, then the incarceration hammer comes down.
Recounting lockup, Phillips focuses on how the other other half lives and the light-hearted cynicism he found from being there. "If you ever wanted to be the smartest person in the room, just go to state prison for a while. You'll probably be that guy the whole time," quips the author, in Sedaris-like style. Still, he ends up deeply empathizing with his downtrodden fellow felons along the way.
Phillips described his odyssey thusly: "I spent most of my life lying around, killing time. This led me to the slammer, where I lied around, killing time. I ended up in prison because of a lack of dedication, patience, and my failure to postpone gratification. So after my release, I wrote a book, which requires enormous amounts of dedication, patience, and postponing gratification. It's a start!" 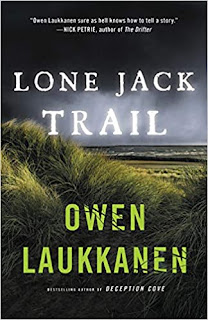 Owen Laukkanen - Lone Jack Trail (2020) - copy from Net Galley
Second in series, I enjoyed the first - Deception Cove, so I'm looking forward to this one.
A veteran Marine and an ex-convict find themselves on opposite sides of the law in this propulsive new thriller from award-nominated suspense master and "powerhouse writer" Owen Laukkanen (Kirkus Reviews).
Could your closest friend be a killer?
When a body washes up outside Deception Cove, Washington, Jess Winslow-once a US Marine, now a trainee sheriff's deputy-is assigned to investigate. But when she realizes it's "Bad" Brock Boyd, a hometown celebrity lately fallen from grace, things become complicated. The last person seen with Boyd was her own boyfriend, Mason Burke.
An ex-convict and newcomer in town, Mason is one of the only people who can understand Jess's haunting memories of her time in Afghanistan-and her love for Lucy, her devoted service dog. Finding one another in Deception Cove has been the best thing to happen to either of them in years. So Jess knows Mason could never be guilty of murder-doesn't she?
As the facts of the case point ever more squarely at Mason, Jess must face that everything she thinks she knows about him might be wrong. A thrilling sequel to Deception Cove, and a heart-pounding adventure all its own, Lone Jack Trail pushes Jess and Mason to a shocking confrontation and will test everything they've come to love and trust in Deception Cove. 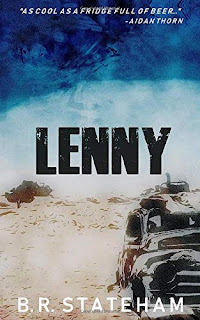 B. R. Stateham - Lenny (2020) - purchased copy
Read Mr Stateham before - A Killing Kiss was enjoyed back in 2015.
Lenny has stared death in the face many times, from the jungles of Thailand & Vietnam to the mountain passes of Afghanistan.Now after a career of service he’s back in his hometown of Ballard, Texas looking for what comes next.Sheriff Greene knows an asset when he sees one and it’s not long before he signs Lenny up as his new deputy in the fight against the narcotics cartel that has over-run their quiet border town.20 years in the army have taught Lenny never to underestimate the things people are capable of but as the bullets begin to fly and the casualties begin to mount it’s just possible that his investigation may bring him closer to home than he ever expected.
Praise for B.R. Stateham
“Cooler than a fridge full of beer…”“This is modern noir at its very best…”
“B.R. Stateham is at the top of his game right now…”“Lenny may be the best thing B.R. Stateham has ever written, and as readers of his work will know, that’s quite a high bar to hit.”“B.R. Stateham has created an action packed tale - another winner from Fahrenheit Thirteen…” 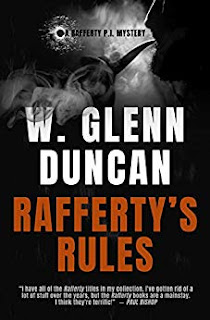 W. Glenn Duncan - Rafferty's Rules (1987) - purchased copy
First in an interesting looking series of six from the author...
Bikers kidnapped her daughter
She wants Rafferty to kill them all
And she’s willing to pay …
Rafferty ain’t in the revenge business.
So when he gets told to gun down the low-lifes who kidnapped Vivian Mollison and put her into a drug-induced twilight zone, it’s no can do.
No matter how much money Vivian’s mother is willing to throw at him.
But stirring up trouble amongst five outlaw bikers who picked on the wrong girl?
Now that’s more like it.
Years ago, Rafferty saved Vivian’s life. Can he do it again? 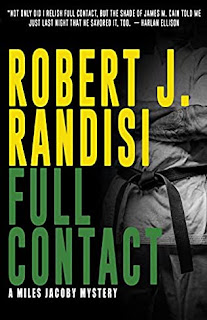 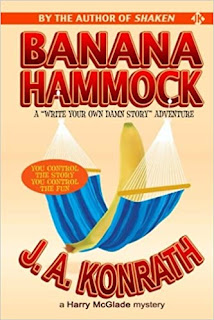 J. A. Konrath - Banana Hammock (2010) - Amazon Freebie purchase
I've a few books on the pile from this prolific author. I suppose I should read him at some point.
Private Detective Harry McGlade is hired by an Amish woman who suspects her husband is cheating on her. Going undercover into their community, Harry must untangle a web of lies and deception to find the truth. This will be his biggest challenge yet. Because Harry McGlade is an idiot.
Lead Harry through a series of comic misadventures and bad puns as he traverses the J.A. Konrath universe, popping into many familiar books and stories. Prepare to be shocked and amazed by scenes that are just plain wrong.
Posted by col2910 at 11:11