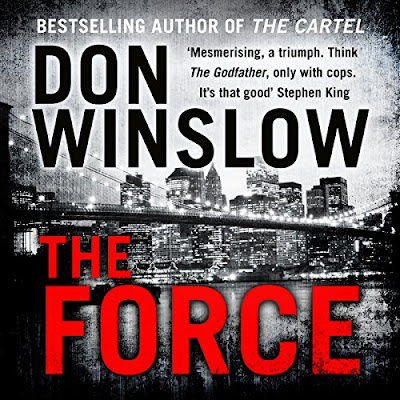 From the New York Times bestselling author of The Cartel – winner of the Ian Fleming Steel Dagger Award for Best Thriller of the Year – comes The Force, a cinematic epic as explosive, powerful, and unforgettable as The Wire.

Everyone can be bought. At the right price…

Detective sergeant Denny Malone leads an elite unit to fight gangs, drugs and guns in New York. For eighteen years he’s been on the front lines, doing whatever it takes to survive in a city built by ambition and corruption, where no one is clean.

What only a few know is that Denny Malone himself is dirty: he and his partners have stolen millions of dollars in drugs and cash. Now he’s caught in a trap and being squeezed by the FBI, and he must walk a thin line of betrayal, while the city teeters on the brink of a racial conflagration that could destroy them all.

Don Winslow’s latest novel is a haunting story of greed and violence, inequality and race, and a searing portrait of a city on the edge of an abyss. Full of shocking twists, this is a morally complex and riveting dissection of the controversial issues confronting society today.

‘There won’t be a better cop novel this year than The Force by Don Winslow. Not next year, or the year after that, either’ Linwood Barclay

13 hours and 26 minutes of my life I'll never get back. Only joking.

It's been a few years since I read anything by Don Winslow, despite seeming to accumulate his latest books whenever they get released. Far too long really and a mistake I won't make again going forward.

The Force is pretty special ........ New York cops, an elite team let by a man with a massive ego and balls that he probably carts around in a wheelbarrow - Denny Malone. Malone and his crew are tough and charged with keeping the streets safe and they're dirty.

Complex, layered, and one which left this reader conflicted.

Not a lot of black and white, loads of grey on display, with plenty of compromises and accommodations and ambiguity. Malone is interesting as a character, but he's not particularly likable. He gets bad guys off the streets, but he fills his pockets at the same time. He inspires loyalty and his guys would run through brick walls for him. He's the alpha male in the pack with an ego to boot. He treats his wife appallingly, but professes to love her. He has enemies within and outside of the force and when his nuts are caught in a vice. He has a choice.... hobson's choice maybe.

One to read again in print at some point in the future. This audible version had a fantastic narration by Dion Graham. There's a real intensity and passion to his narration that puts you in the head of Malone and which drives the book forward.

As well as an examination of one man's choices and conflicts and weaknesses. There's also a wider look at how a police force operates within a community, how it serves those people and sometimes fails them.  How there's a real us and them mentality within the force and that the badge and motto to protect and serve, only goes so far and can be subverted to self interest - protect the force and close ranks. Similarly the City Hall powers operate in a bubble, concerned with appearances and presentation. Image more important than justice, fairness or truth.

I'm in slight disagreement with Lee Child and Linwood Barclay over whether this is the best cop novel ever. I think I'd go with Ellroy's LA Confidential ahead of this one. It's close though.