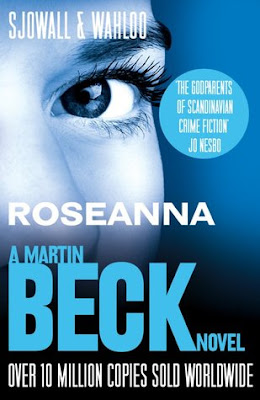 Roseanna is the first book in the hugely acclaimed Martin Beck series: the novels that shaped the future of Scandinavian crime fiction and influenced writers from Stieg Larrson to Jo Nesbo, Henning Mankell to Lars Kepplar.

On a July afternoon, the body of a young woman is dredged from a lake in southern Sweden. Raped and murdered, she is naked, unmarked and carries no sign of her identity. As Detective Inspector Martin Beck slowly begins to make the connections that will bring her identity to light, he uncovers a series of crimes further reaching than he ever would have imagined and a killer far more dangerous. How much will Beck be prepared to risk to catch him?

A re-visit to a book I read many years ago and one I think I enjoyed more second time around.

We have a cradle to grave investigation into the murder of an unidentified woman. I think what I liked about it was the depiction of the investigation where everything unfolds at a pedestrian pace as opposed to the turbo charged supercop energised and manically clearing the case with the suspect banged up before tea time.

Identification takes time, as does building a picture of the victim's life and actions. Eliminations, dead ends, frustration, cross-Atlantic cooperation, fruitless interviews all have a place. A line of investigation offers promise, another interview and a suspect emerges. Background checks, history, gut feeling and instinct, surveillance, teamwork, patience, inertia, inaction, a honey trap and finally some impetus and a few scary moments along the way before the inevitable conclusion.

I really enjoyed it. I liked the portrayal of the lead detective, Martin Beck, his interactions with his colleagues. There's a melancholy about him. He's devoted to his job, he's serious and intelligent and you sense a chasm between himself and his family. There's no real intimacy between him and his wife, despite her cheery efforts and desperation. He can't be bothered to pretend otherwise. Sadly, he seems to have no real affection or interest in his children. Maybe for some detectives marriage and parenthood is best avoided.

I liked the blend of the personal and professional and how one demanded more attention from the main character. I liked the realistic portrayal of a murder enquiry. I liked the diligence and persistence applied, when to give up would have been an easier option.

One down, nine to go. (Eight now as I've subsequently read the second in the series.)

I think most if not all of the series is narrated on You Tube. I did enjoy the deadpan style of the storyteller.