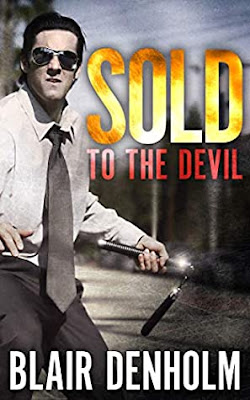 He stirs up trouble just by rolling into town. Can this human wrecking ball on the run dodge the Federal police and a Russian crime syndicate bent on revenge?

Gary Braswell is a walking disaster. Dodging his violent enemies with new papers and the help of a surgeon’s knife, Gary attempts to lie low with a stint in freezing Tasmania. But he’s barely settled in with his stolen $150,000 stash when a body-building thief snatches the cash… and then turns up bloodily dismembered.

When Gary is fingered for the killing, he’s terrified he’ll blow his highly illegal history wide open. And since Australia’s most-wanted man is desperate to avoid a stretch in the slammer, this true-blue criminal better knuckle down quickly before he gets nailed.

Will the knockabout party animal escape the cuffs and dodge a snowstorm of strife?

Sold to the Devil is the gritty second book in a fast-paced comic noir thriller series. If you like hilarious page-turners, screwball characters, and crazy twists and turns, then you’ll love Blair Denholm’s high-powered sucker punch.

Another enjoyable Gary Braswell adventure, following on from the fantastic series opener, Sold.

Braswell is on the run in Tasmania and recovering from some cheapskate botched plastic surgery which doesn't exactly help him blend into a crowd. He's supposed to be laying low with his girlfriend, but discretion isn't really part of his make-up.

A party which gets out of hand sees Gary taken advantage of sexually while unconscious and to add insult to injury, the beefy bodybuilder steals Gary's stash of cash. Madness and mayhem ensues as Gary tries to find a way to get his cash back without exposing himself to more danger.

There are some great comedy scenes throughout the book and Gary is a character who I warmed to. He's the sort of mate where you might have some fun in his company, but you'd always be mindful that he's only ever one drink away from disaster or an international incident. Definitely not best mate material, but always entertaining. As a comedy crime book goes, I really enjoyed this one. Fast-paced, madcap incidents, intersting setting of Tasmania, a decent supporting cast of characters..... the bodybuilder and part time gigolo, the pervert policeman, Gary's girlfriend, his new best mate and criminal accomplice and workmate at the shrimp farm, where Gary's gigging to get by. It's a book that doesn't take itself too seriously and achieves its aim of entertaining.

Best book ever?
No, but a solid 4 from 5 with an ending that just begs for a third Gary Braswell book.