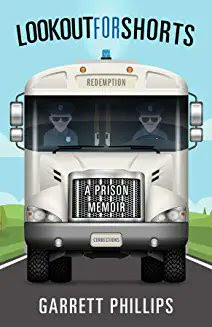 An arrest and conviction for trafficking ecstasy can be comical. The character-strewn path of corrections that followed is entertaining and enlightening. This is the story of a "book-learnin' smart-ass" who endured a three-year minimum-security tour of the slammer and lived to make fun of it. And who emerged a humbled and better man.

Lookout For Shorts is a departure from hardcore prison fare; it is gonzo and humorous in tone. Picture the worst cruise ship imaginable, full of guests from The Jerry Springer Show, that never reaches a port. Tales abound of inmate absurdities and administrative follies juxtaposed against the coarse subculture of lockup. Along the way, Phillips unflinchingly describes his drug-dealing days, a rehab stint, and his misspent youth.

We've all heard of Orange Is the New Black, the fish-out-of-water story that provided a glimpse into a fascinating micro-society. Lookout is similar but zips several steps further into humor. The main hazard the author faced was his head exploding from being immersed in a sea of weirdos and misfits. The nuttiness nearly made him forget about the ever-present threat of losing teeth and suffering fresh scars.

Culled from copious journals, most of this tale is prison-based. The story begins with the arrest of a Generation X slacker, for dealing drugs at a jam band concert. Description of an upscale rehab stint and living in an AA-based halfway house follow, then the incarceration hammer comes down.

Recounting lockup, Phillips focuses on how the other other half lives and the light-hearted cynicism he found from being there. "If you ever wanted to be the smartest person in the room, just go to state prison for a while. You'll probably be that guy the whole time," quips the author, in Sedaris-like style. Still, he ends up deeply empathizing with his downtrodden fellow felons along the way.

Phillips described his odyssey thusly: "I spent most of my life lying around, killing time. This led me to the slammer, where I lied around, killing time. I ended up in prison because of a lack of dedication, patience, and my failure to postpone gratification. So after my release, I wrote a book, which requires enormous amounts of dedication, patience, and postponing gratification. It's a start!"

A prison memoir and one man's tale of his time incarcerated after a conviction for dealing drugs.  I kind of expected it to be a bit funnier than what it was, but obviously humour is subjective. That said it was a light read and not filled with doom, gloom and acres of grim.

I think what I liked was the author's acceptance of his arrest and imprisonment which almost came as a relief to him. There's no denial or fake protestations of innocence. He's a bit annoyed at the event which caused his arrest, a "friend" informing on him to the cops, but overall he's philosophical. It's the culmination of a life thus far lived fecklessly and littered with poor choices, driven by a lack of ambition or focus. He almost welcomes it as a chance to reset and start again.

Phillips recounts rehab before his sentence is passed, followed by his three years or so in the system and it's not overly exciting. By that I'm not dissing the writing, I mean his time in prison is boring...... no lock downs, riots, shankings, race wars or years locked up in solitary to recount. I suppose boring is harsh. When your freedom is taken away from you, your world shrinks and the mundane and trivial assume greater significance. Overall I liked it and wish the author well in his future years. For the author's sake, hopefully there won't be a sequel.