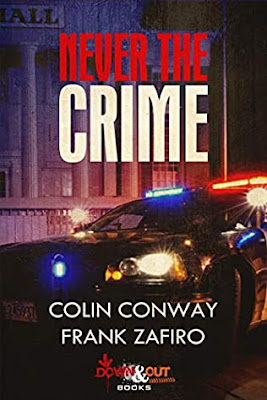 Spokane Police Officer Tyler Garrett is a man of many different images. To the public, he is a once-maligned and now redeemed cop, the victim of public prejudice and city politics. To the Chief of Police and the Mayor, he is a good cop, falsely accused and thankfully back to work. To his wife, a man she no longer knows. And to those who know his secret, he is the most terrible thing any police officer can be—a traitor to his badge.

Clear of the controversy that surrounded him less than two years ago, Garrett is moving on and getting his life back in order. Meanwhile, Detective Wardell Clint remains on the hunt for any evidence against him that proves what Clint already knows—that Tyler Garrett is dirty. Clint has vowed to stop at nothing to bring down Garrett once and for all.

In the midst of Clint’s efforts, a rash of new city hall scandals break out, including a suspicious death, and Tyler Garrett inserts himself into the investigation. But he isn’t the only one. No one seems immune to being drawn into the web of dirty politics. Officer Gary Stone, assigned as a liaison to city hall, finds himself thrown into the midst of this maelstrom, struggling as his loyalties and ethics are challenged. The mayor, the chief, councilmembers, police captains, and news reporters all square off, each with their own agenda.

Before it ends, everyone will learn that it’s never the crime that causes downfall, but the following cover-up.

The follow on from the fantastic Charlie 316 and one I enjoyed nearly as much as its predecessor.

The events of Never the Crime still take place in Spokane, Washington and the cast of characters is similar to the previous book, with some new players introduced into the drama and some minor characters given more of a voice. My favourite, the incorruptible Wardell Clint, doesn't feature quite as much in the early stages of the book, but comes to the fore later on.

Similar in theme to the previous book...... dirty doings at City Hall, inappropriate behaviour, media outings, the court of public opinion, corruption, under the table payments, a teenage suicide, a hush hush investigation, a fake friendship, murder, press leaks, a female cop in command and trying to prove her worth, a patrol cop under pressure, inter agency cooperations, mental health issues, interactions in the community, complaints and career jeopardy, an ambitious politician, a slippery old foe - the mayor, the police chief and Tyler Garrett - the main player in the last book and an ongoing thorn in Wardell Clint's side.

Another fast read, another page turner and one probably best enjoyed after reading the first, Charlie 316, in my opinion.

Topical in tone with the behaviour of the police hierarchy and politicians exposed and under scrutiny, their motivations and scheming explored and examined from opposing viewpoints. We also see the daily routine of a good guy patrol cop, the decision making, the snap judgements, the frustrations, the balancing act between firm authority and over the line aggression, the fears, the bravery, and the doubts .

A satisfying read and again an over-riding and unresolved story arc still very much in play. Roll on book 3.

Charlie 316 the first in the series was enjoyed earlier in the month. Thoughts here.