Half a dozen dirty rascals that have already caught my eye and which I hope to tuck into in 2021.

Of the 6 featured on BOOKS I'M LOOKING FORWARD TO IN 2020, I managed to read two and one of those was only read on New Year's Eve or the day before.

From BOOKS I'M LOOKING FORWARD TO IN 2019 I still haven't read any of them yet.

Maybe I ought to title the post - BOOKS I'M LOOKING FORWARD TO OWNING IN 2021, BUT PROBABLY WON'T GET AROUND TO READING (EVER) S.A. Cosby - Razorblade Tears (2021)
Loved Cosby's My Darkest Prayer back in 2019.
He smashed it last year with Blacktop Wasteland, a book which featured on countless best of 2020 lists and one which I was looking forward to, bought but never actually found the time to read.
Maybe I will have got to it before this one drops in the middle of the year......
Synopsis/blurb.....
A Black father. A white father. Two murdered sons. A quest for vengeance.
Ike Randolph has been out of jail for fifteen years, with not so much as a speeding ticket in all that time. But a black man with cops at the door knows to be afraid.
The last thing he expects to hear is that his son Isiah has been murdered, along with Isiah’s white husband, Derek. Ike had never fully accepted his son but is devastated by his loss.
Derek’s father Buddy Lee was almost as ashamed of Derek for being gay as Derek was ashamed his father was a criminal. Buddy Lee still has contacts in the underworld, though, and he wants to know who killed his boy.
Ike and Buddy Lee, two ex-cons with little else in common other than a criminal past and a love for their dead sons, band together in their desperate desire for revenge. In their quest to do better for their sons in death than they did in life, hardened men Ike and Buddy Lee will confront their own prejudices about their sons and each other, as they rain down vengeance upon those who hurt their boys.
Provocative and fast-paced, S. A. Cosby's Razorblade Tears is a story of bloody retribution, heartfelt change - and maybe even redemption. 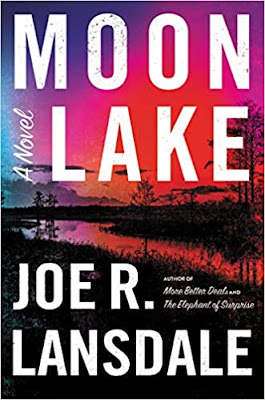 Joe R. Lansdale - Moon Lake (2021)
Loved Lansdale's More Better Deals which was one of the books featured on my 2020 list and which I actually managed to read.
I do need to pull my finger out and get properly stuck into his Hap and Leonard books
Synopsis/blurb....
Edgar award-winning author Joe Lansdale returns with a standalone novel following the gripping and unexpected tale of the lost town and dark secret that lie beneath the glittering waters of an East Texas lake.
Daniel Russell was only thirteen years old when his father tried to kill them both by driving their car into Moon Lake. Miraculously surviving the crash— and growing into adulthood— Daniel returns to the site of this traumatic incident in the hopes of recovering his father's car and bones. As he attempts to finally put to rest the memories that have plagued him for years, he discovers something even more shocking among the wreckage that has ties to a twisted web of dark deeds, old grudges, and strange murders.
As Daniel diligently follows where the mysterious trail of vengeance leads, he unveils the heroic revelation at its core. 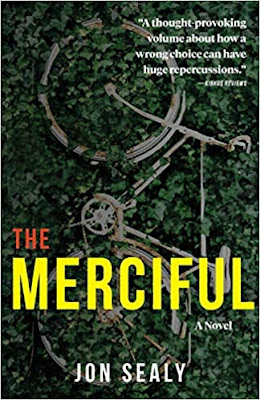 Jon Sealy - The Merciful (2021)
Not an author I have tried before, but this one has caught my eye and I can't remember where I got wise to it.
Out in February. If I like it I might be tempted to dig around and see what he has written prior to this one.
Synopsis/blurb.....
Jon Sealy's The Merciful is a scathing morality play that explores a cast of small-town characters surrounding a deadly hit and run in coastal South Carolina.
The low-country town of Overlook is a sleepy tourist and retirement community known for its golf courses and laid-back lifestyle. But when 19-year-old Samantha James is killed in a hit and run one night while riding her bicycle home from work, the town sets out to crucify the alleged culprit, Daniel Hayward. The headlines tell a compelling story, but the truth is much less clear. As in the film Rashomon, everyone has a "story" about what happened: the media, the prosecutor, the defense attorney, Daniel, and Samantha's family.
As the book examines these myriad perspectives, The Merciful's stunning scope ranges from characters striving for a kind of American success that's just out of reach, to questions of data analytics, brain emulations, and the very survival of humanity. Ultimately, however, the novel is a morality play that asks tough questions about the nature of justice-and mercy. What do you do when one moment, one accident, one decision changes the course of life forever?
As the novel circles around the hit and run and the subsequent trial, Jon Sealy offers both a gripping courtroom drama and a probing look at questions of justice and mercy in our era of competing narratives and online outrage. 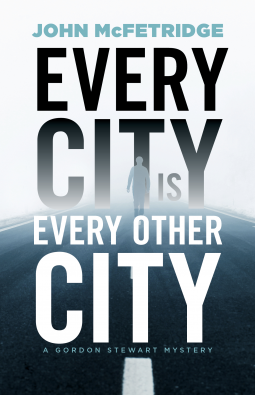 John McFetridge - Every City is Every Other City (2021)
It's a toss up between John McFetridge, Sam Wiebe or Dietrich Kalteis for the accolade of my favourite Canadian crime fiction author.
McFetridge has been quiet for a couple of years, but I'm really looking forward to this one; that said there are maybe three or four of his on the TBR pile that I haven't yet read. WTF!
Synopsis/blurb....
Behind the scenes, nothing is what it seems.
Gord Stewart, 40 years old, single, moved back into his sub-urban childhood home to care for his widowed father. But his father no longer needs care and Gord is stuck in limbo. He's been working in the movie business as a location scout for years, and when there isn't much filming, as a private eye for a security company run by ex-cops, OBC. When a fellow crew member asks him to find her missing uncle, Gord reluctantly takes the job. The police say the uncle walked into some dense woods in Northern Ontario and shot himself, but the man's wife thinks he's still alive.
With the help of his movie business and OBC connections, Gord finds a little evidence that the uncle may be alive. Now Gord has two problems: what to do when he finds a man who doesn't want to be found, and admitting that he's getting invested in this job. For the first time in his life, Gord Stewart is going to have to leave the sidelines and get into the game. Even if it might get him killed. 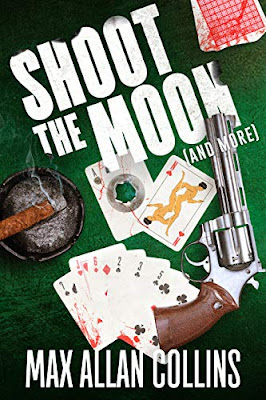 Max Allan Collins - Shoot the Moon (and more) (2021)
I don't find all of Max Allan Collins books appealing but I've loved his Nolan and Quarry series of books, or at least the half dozen or so of the Quarry books I've read thus far.
Some of his standalones including this one tickle my fancy.
Synopsis/blurb....
AN OFF-THE-WALL ROMP AND OTHER EXHILARATING CRIME STORIES.
Recent almost-college-grad Fred Kitchen and his eccentric six-foot-four pal, Wheaty, pay off a poker debt with a prank – showing their stuff in the then-current fad of streaking.
Soon they are under arrest and in jail, killing time by playing cards with a couple of hardened criminals, unwittingly racking up a new debt...one that can only be paid off by participating in a bank robbery during a small-town festival.
Written as a tribute to the comic novels of his mentor Donald E. Westlake, Shoot the Moon is a fast, funny crime novel written early in his career by Max Allan Collins. 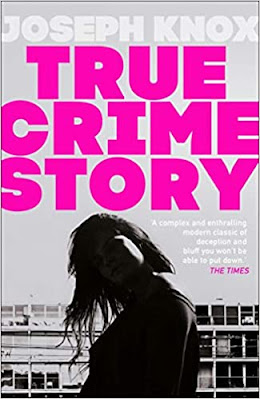 One of the rising stars - scrub that, established stars of British Crime Fiction and I've not read him yet.

In the early hours of Saturday, December 17th, 2011, Zoe Nolan, a 19-year-old Manchester University student, walked out of a party taking place in the shared accommodation where she had been living for three months.

She was never seen again.

Blending fact and fiction in his first stand-alone novel, Joseph Knox delivers a thrilling true crime story like no other.