A couple from American author Robin Yocum. Yocum is the author of half a dozen novels, of which I've read two and really enjoyed them both - 5 STAR READS, the pair of them! 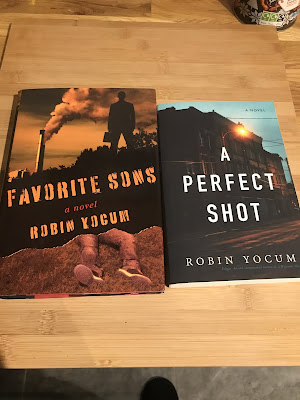 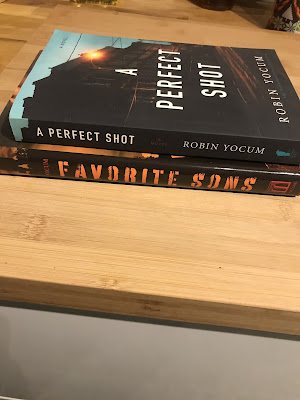 My intention is to catch up on his back catalogue and read his next one which drops a bit later this year. He's highly recommended. I think part of the attraction for his books is that they are all set in Ohio. It's not a region that features too much in my reading. I have a tendency to gravitiate towards US crime and mystery fiction, but a lot of it is set in and around New York, LA, San Francisco or Chicago. They're are places I love to visit, but I do like spreading my wings further afield.

The full list of his books is as follows: 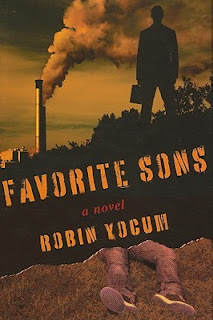 A riveting novel in which old friends must excavate the formative event of their childhood - a murder - and determine how to pit truth against justice.

Narrator of Favorite Sons Hutch Van Buren is fifteen years old, playing sports and searching for arrowheads in a small industrial town in Ohio with his three closest friends when an altercation between the comrades and Petey Sanchez, a troubled seventeen- year-old, leads to Petey's accidental death. Together, Hutch and his friends become ensnared in a web of secrets and moral dilemmas. A local ne'er-do-well goes to jail for the crime while the boys keep their pact of silence. Each boy shoulders the burden of truth in his own way as each attempts to leave the past behind.

Thirty-three years later, in 2004, Van Buren is the prosecuting attorney in Summit County, Ohio, and a candidate for state attorney general when he learns that he and his boyhood friends weren't the only ones keeping a secret about Petey's death. A convicted sex offender in need of a favor attempts to blackmail Van Buren in return for his silence. Van Buren must decide between his political career and the duty of the office he has sworn to uphold. With the clock ticking, Van Buren has a week to seek out his boyhood friends and search his soul while he sorts out three decades of deceit he helped create. 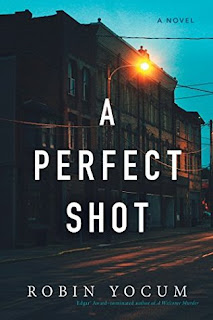 A local basketball star in a small Ohio town tries to remake his life in middle age, but instead must confront a murderer and the prospect of leaving his hometown and giving up everything that once gave his life meaning. Nicholas "Duke" Ducheski is the most important man in the eastern Ohio steel town of Mingo Junction. Nearly two decades after he made the winning shot in the state championship
basketball game, he remains much adored and the focal point of community pride. Hardly a day passes when someone doesn't want to talk about "the game." Now approaching forty, Duke no longer wants to be defined solely by something he did when he was eighteen. So he decides to parlay his local popularity into a successful restaurant--"Duke's Place." But no sooner does he get his restaurant up and running than disaster strikes. One day, "Little Tony" DeMarco, his brother-in-law and a known mob enforcer, comes into the restaurant and murders Duke's oldest friend. Now Duke faces the hardest decision of his life. DeMarco thinks he's untouchable, but Duke discovers a way to take him down, along with his mob superiors. To do so, however, means leaving Mingo Junction and sacrificing his treasured identity as the town legend. And if he follows through, what will remain of his life?
Posted by col2910 at 11:23