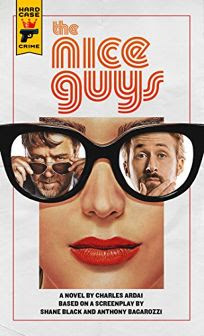 Synopsis/blurb....
SOME GUYS HAVE ALL THE LUCK. NOT THESE GUYS.
Holland March is a private eye with a defective nose and a broken arm. Jackson Healy is the tough guy who put him in a cast. Not the two most likely men to team up for a missing girl, or look into the suspicious death of a beautiful porn star, or go up against a conspiracy of the rich and powerful that stretches from Detroit to D.C.. Hell, they're not the most likely pair to team up to do anything. But there you go.
And if they somehow survive this case, they might just find they like each other.
But let's be honest.
They probably won't survive it.
Another one of those books that I read a while ago, probably enjoyed - or at least wasn't bored to tears by - but can't remember Jack all about. It's a novelisation of a film of the same name and I've never seen the film either. If I cross paths with it, I'll give it a watch, but I'm not busting a gut to track it down.
On the face of it, this one ticks a lot of the boxes regarding tropes in crime fiction that I enjoy.... PIs, a missing person case, a dead porn star, conflict between the Is and conspiracies. I think I was probably just jaded, coming to the end of what seemed like the longest ever year on record. Read another time in another mood, it might have rocked my boat.
From memory - a few laughs were had,. I liked Holland's daughter sticking her nose into the case and defying her father. I liked that it gave March and Healy an additional problem to worry about as she puts herself in jeopardy. I was amused by the dynamics of the three of them and how the relationship developed from physical violence and animosity to an almost friendship.
The rest I can't really recall.