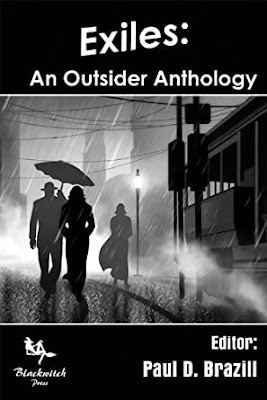 Synopsis/blurb.....
A powerful Noir short story collection edited by the Bukowski of Noir, Paul D. Brazill.
Exiles features 26 outsiders-themed stories by some of the greatest crime and noir writers, K. A. Laity, Chris Rhatigan, Steven Porter, Patti Abbott, Ryan Sayles, Gareth Spark, Pamila Payne, Paul D. Brazill, Jason Michel, Carrie Clevenger, David Malcolm, Nick Sweeney, Sonia Kilvington, Rob Brunet, James A. Newman, Tess Makovesky, Chris Leek, McDroll, Renato Bratkovič, Walter Conley, Marietta Miles, Aidan Thorn, Benjamin Sobieck, Graham Wynd, Richard Godwin, Colin Graham, and an introduction by Heath Lowrance.
A collection of short stories which I've had on the Kindle for a while without ever rushing to read them, despite enjoying a lot of the contributors works separately....... eg K. A. Laity, Aidan Thorn, Chris Rhatigan, Paul D. Brazill, Rob Brunet, McDroll and more.
All of the stories had a common theme - EXILE.
For my OCD self the full list is below.
We Are All Exiles: An Introduction by Heath Lowrance
Reflections on a Decade in the Wild East by Colin Graham
Eating the Dream by K. A. Laity
Midnight Train to Delhi by Chris Rhatigan
Boxing Day in Muros by Steven Porter
We Are All Special Cases by Patricia Abbott
Never a Vessel Large Enough by Ryan Sayles
The Solomon Sea by Gareth Spark
Agent Ramiel Gets the Call by Pamila Payne
The Weather Prophet by Paul D. Brazill
The Rain King by Jason Michel
Dullcreek by Carrie Clevenger
In America by David Malcolm
The Place of the Dead by Nick Sweeney
Disappearing Act by Sonia Kilvington
What Friends Are For by Rob Brunet
Pacific Coast Highway by James A. Newman
Dead Man Walking by Tess Makovesky
Shut Out The Light by Chris Leek
Flying In Amsterdam by McDroll
The Tribe by Renato Bratkovic
Wetwork by Walter Conley
Digger Davies by Marietta Miles
Taking Out The Trash by Aidan Thorn
Missing An Ear by Benjamin Sobieck
The Tender Trap by Graham Wynd
Falling Through The Hourglass by Richard Godwin
Exiles : Biographies
Acknowledgments
Truth be told there were more than a couple which had me scratching my head as the meaning of a few particular tales passed me straight by or just didn't particularly rouse my interest.
To be fair more worked for me than not, but having struck a couple of bum notes (to my ears at least) in the first half of the anthology, I found myself approaching the rest of the tales with a sense of trepidation as opposed to anticipation.
There were some memorable tales which did satisfy me - Aidan Thorn and Paul D. Brazill in particular can take a bow.
Overall though, a bit too uneven for my liking. The intention was admirable though and the proceeds from the book were/are used to support a charity - The Marfan Foundation, 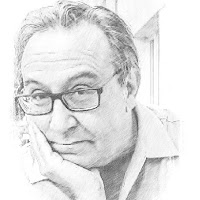 One consequence of reading the collection was pausing to reflect on occasions in my own life when I have felt exiled and an outsider..... from country, in school, from friends, in the workplace, and with family.
Some of the feelings were temporary and fleeting as reconciliations occurred. Others are irreconcilable.
3 from 5
Read - January, 2021
Published - 2014
Page count - 198
Source - purchased copy
Format - Kindle
Posted by col2910 at 07:06