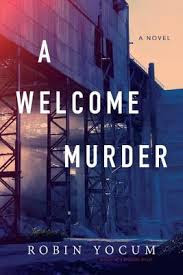 After his unspectacular professional baseball career ends with a knee injury in Toledo, Ohio, Johnny Earl gets busted for selling cocaine. After serving seven years in prison, all he wants to do is return to his hometown of Steubenville, retrieve the drug money he stashed before he went to jail, and start a new life where no one has ever heard of Johnny Earl.

However, before he can leave town with his money, Johnny is picked up for questioning in the murder of Rayce Daubner, the FBI informant who had set him up on drug charges in the first place. Then his former prison cellmate shows up - a white supremacist who wants the drug money to help fund an Aryan nation in the wilds of Idaho.

Five memorable characters, each with a separate agenda, come together in this layered tale of murder, deceit, and political intrigue.

After a couple of chapters I thought I might be in for a rocky read here. Yocum was alternating narration between Johnny Earl and Sheriff Francis Roberson and I wasn't enjoying the voice of either one of them to be honest. Quick to snap judgments, they were a couple of tools in my opinion.

Reading on, the book soon settled down and I was fairly engrossed in the tale, the possible outcome, the ambitions and foibles of all our characters and the interplay between them all.

Johnny Earl - ex-small town sports hero, the high school star sunk low, injury ending the professional career and the short term success as a drug dealer, thwarted by an FBI sting. Seven years, not in Tibet but clink follow and he's out wanting to pick up his hidden drugs cash and get out of town.


Sheriff Francis Roberson – since a young age he professed a laughable desire to be the President of the US one day, a father who took him seriously has him working as a small town sheriff as the first step in a political career.

Dena Marie Conchek Androski Xenakis – the town bicycle and historic lover of Johnny, who she still holds a torch for. She’s had a fling with the sheriff before she was warned off by his wife and Roberson realised the damage that could be done to his political ambitions. Also used to dance horizontally with our murder victim, Rayce Daubner. She loves a bad boy and treats husband "Smoochie" like dirt.

Allison Roberson - wife of the sheriff, works as a despatcher for the police department, and hates her life in this small town. She wants away. How's that going to happen?

Matthew Vincent “Smoochie” Xenakis - nicknamed Smoochie since high school because of his big lips, the unfortunate moniker has stuck with him through small town life. Nobody takes him seriously, least of all his wife. Put upon at home and at work, confidence and self-assurance are not attributes he possesses. A run-in with Daubner, one which ended badly gives him motive for murder, even if no-one seriously believes he possesses the balls for such an act.

Chuck in some white supremacists who want to use Earl's money to fund a new Aryan state, plus an FBI agent with a history with Roberson, a long memory and a score to settle and there's a twisted tale of murder to be solved.

I really liked this one. Cleverly constructed with the five different narrators offering first-hand insights into each of the main characters and eventually revealing what happened. I've been thrilled by Robin Yocum's work before. His novel - A Brilliant Death was another top rated read for me, a year or two ago. Thoughts here.