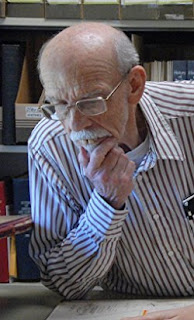 J. R. Lindermuth, author of the Sticks Hetrick series and more, answers a few questions on the blog.

His Shares the Darkness was enjoyed recently - a few thoughts are here. 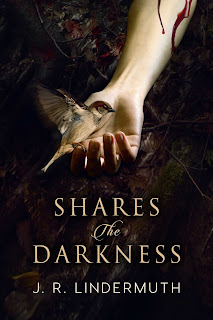 JRL: I retired in 2000 after 40 years in the newspaper business, as a reporter and editor. I'd written and published magazine articles and stories in a variety of magazines while working but didn't succeed in publishing a novel until after retiring. Now I work on fiction and non-fiction full-time, do a weekly column for the local newspaper and serve as librarian for my county historical society, where I assist patrons with genealogy and research.

JRL: The goal is to write every day. I don't pay as much attention to word count as I once did. I write until I feel I've said what I can for the day. Sometimes I'll come back and add more later in the day.  The output varies. It might be a page. It might be 20 pages.

JRL: Not consciously. But I believe, in the case of all writers, the subconscious will dredge up segments of what we've experienced in the familiar and propose it as fitting behavior for our characters. 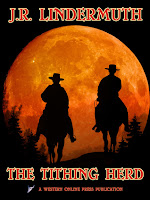 JRL: I'm more of a pantser than a plotter. When I start a story I usually have a general idea where it's headed and even have jotted down some sketchy notes about a character or scene. I'm often surprised where a character will lead. I think I'd be bored and unable to finish a story if I knew where it was headed every step of the way.

I’ve just read SHARES THE DARKNESS recently, the seventh in your Sticks Hetrick books. Can you tell us a bit about Sticks and his team and the location - Swatara Creek? I noticed he seemed to take a bit of a back seat role to one of his officers in this one, is that usual for the series or a bit of a departure for you?

JRL: Sticks began as a character in a short story. In the first novel he's a bored, widowed, retired police chief who becomes an unofficial consultant to his less-experienced successor on the job. In the third book, he entered into a new romantic relationship and in the fourth accepted a job as county detective. He's the main character in all seven novels but sometimes other officers he mentored get a starring role--as is the case in Shares The Darkness. Sticks is again the protagonist in In Silence Sealed, the eighth, which is to be released in February.

Swatara Creek is a fictional community named for an actual creek of the same name. Swatara Creek is solely the invention of this author, though it is representative of many of the older Susquehanna River towns that have become bedroom communities for the more metropolitan areas of the Commonwealth after suffering economic downturns that might otherwise have doomed them. The town is located near Harrisburg, the state capitol of Pennsylvania, and my officers occasionally visit the city, either for pleasure or on duty.

How long from conception to completion did SHARES THE DARKNESS take? Was it a smooth process or were there many bumps in the road along the way?

JRL: Shares was conceived and written during a period in which I was under treatment for cancer. So, no, it wasn't a smooth process. There were times when I thought it would never be completed. But working on it helped me cope with the health problem, kept me sane and got me through it.

You have around 15 novels published in total, is there one you are more proud of than any of the others? If so, why?

JRL: Books are like children to writers. We love them all, though there may be times when we're critical of them and wish we'd done better by them.

What book of yours would you press into the hands of a new reader?

JRL: Like children, it's difficult to declare one a favorite. But one I think did turn out particularly well and I'm proud of is Watch The Hour, a historical novel set in Pennsylvania's anthracite coal region in the 1870s. Ben Yeager is a police officer sworn to protect property of mine owners. His job makes him the enemy of the miners, who are primarily Irish. And Ben is in love with an Irish lass.

Can you tell us a bit about your non-Sticks books please? I believe there's a few Westerns among the bunch, does it take a different mindset to write a Western as opposed to a mystery?

JRL: Yes, I've recently published two Westerns (Geronimo Must Die and The Tithing Herd), but it isn't exactly a new genre to me. I've written numerous Western short stories and the two novels in my Sheriff Tilghman series (Fallen From Grace and Sooner Than Gold), though set in 19th century Pennsylvania, were promoted as Westerns by the publisher. A third in that series is coming from another publisher. I've also published historical fiction, a non-fiction regional history and The Limping Dog, a standalone mystery.

JRL: I'm neither famous or rich, but I've gathered a small band of fans and it pleases me when people tell me they enjoy my stories.

JRL: Oh, we all have those. Some are completed, but haven't found a home; others are worked on sporadically and may never be completed. Still we persevere.

JRL: I'm working on the ninth in the Hetrick series and also another Western.

JRL: Having someone say they enjoyed your work.

JRL: The necessity of marketing and the difficulty of being 'discovered' amidst all the competition out there.

JRL: I'm a voracious reader of both fiction and non-fiction with a large leaning toward mystery on the fiction end. Of course I have favorites I keep going back to. People like James Lee Burke, Ruth Rendell, Bernard Cornwell, Ian Rankin and others. But I'm constantly discovering new writers, too--both known and unknown. For instance, I've recently been reading a lot of Ann Cleeves, enjoyed Andrew Hughes' second novel, The Coroner's Daughter, and loved a debut novel by Abir Mukherjee, A Rising Man.

JRL: There are those I admire. But I wouldn't want to have written them because then they would be different.

JRL: I enjoy spending time with family. Reading, naturally. Walking (used to be hiking when younger. Now I'm just happy to be able to do a few miles a day to stay limber and refresh the mind). I like to draw, mostly pen & ink; occasionally colored pencils or pastels. I enjoy browsing bookstores, antique shops and museums. Listening to music, especially classical, folk and blues, and watching films.

JRL: One of the best films I've watched this year is "Genius," about the relationship between Maxwell Perkins and Thomas Wolfe.  The story was intriguing, the acting excellent. Of course, it might not have been as interesting to non-writers.

TV addict or not? What’s the must watch show in the Lindermuth household?

JRL: Sadly, there are few 'must watch' shows on TV for this viewer. Call me an old codger, but I think TV drama and comedy was much better when I was a youth. I did recently enjoy the second season of Jane Campion's Top of the Lake: China Girl. And I also never fail to tune in when my local PBS station broadcasts episodes of Prime Suspect, Inspector Morse, Endeavour, Inspector Lewis, Foyle's War, As Time Goes By, One Foot in the Grave, Doc Martin and some others. I also relish the old Law and Order. Other than that, primarily films. 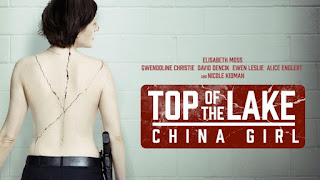 His last few published books are