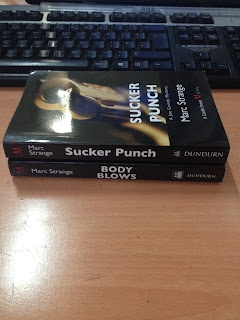 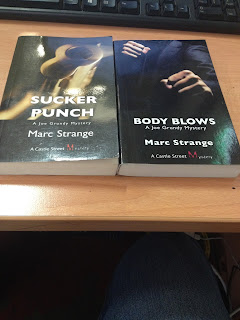 Marc Strange was not an author I was familiar with until Dietrich Kalteis name-dropped him a week or so ago when he answered a few questions on the blog.

Marc Strange was the co-creator of the long-running television series "The Beachcombers". As a character actor, he has appeared in numerous television shows and films, most recently in the cable television science-fiction show "ReGenesis". His first book, "Sucker Punch" was nominated for the Arthur Ellis Award for best first mystery novel. His novel "Body Blows" followed in 2009 and won the Edgar Allan Poe Award for best original paperback.

There were two novels in the Joe Grundy series, followed by another two books with a different lead. 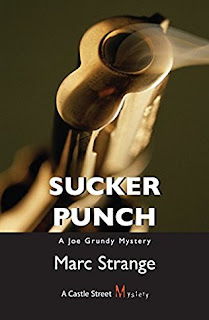 Joe Grundy is an ex-heavyweight boxer whose main claim to fame was that he got knocked out by champ Evander Holyfield. Now he's chief of security for a posh old hotel, the Lord Douglas, in downtown Vancouver, and life is pretty good. But then a young neo-hippie inherits more than half a billion dollars and decides to give it all away. As soon as the kid checks into the Lord Douglas with the intention of holding a press conference to announce the scheme, Joe knows big trouble is headed his way, especially when the kid winds up dead.

Grundy sets out to discover who murdered the would-be philanthropist only to collide with suspects and sucker punches around every corner. Joe had some pretty tough battles during his days in the ring, but this time the stakes are higher, the opponents are lethal, and the final count could be fatal. 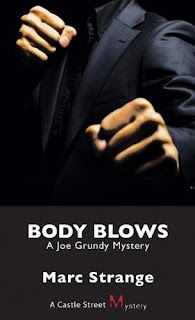 Ex-boxer Joe Grundy is embroiled in the intrigues of his own boss, millionaire Leo Alexander, the owner of Vancouver's Lord Douglas Hotel. Somebody has murdered Leo's live-in servant and not-so-secret lover, and Grundy has to get to the bottom of the incident in order to clear the man he's forged a bond with since first coming to work for him as security for the hotel. But Leo's past serves up more surprises than Grundy bargained for

It seems Leo has had a life full of death, jilted mistresses, spurned spouses, sharp business deals, and explosive relationships with estranged children. Another corpse pops up, Leo is arrested and jailed, and Grundy takes more hits to his body and psyche than perhaps even he can handle.


Thoughts of real and imagined death are stalking the corridors of the Lord Douglas, and Joe Grundy has to keep swinging to stay alive and remain sane.