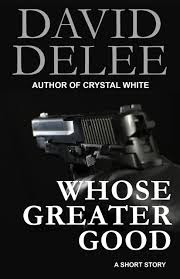 Dawson has seen miscarriages of justice before—firsthand, and it cost him his family—so when Kristine Seleski tells him about the man who brutally beat and raped her daughter, Amy, and how the district attorney’s office suddenly refused to prosecute the case, Dawson doesn’t hesitate to help.

But, while trying to track down Amy’s assailant, what Dawson discovers makes his blood run cold. Refusing to accept the compromises the legal system is willing to settle for, Dawson sets in motion his own plan for justice, one that will be bloody and violent…and absolute.

Another short read from David DeLee after enjoying his Cop Shot a few years ago.

40 pages long and also including the opening chapter to his full length novel Fatal Destiny, which features his bounty hunter Grace deHaviland.

Whose Greater Good is a tale of a vigilantism. A girl was attacked and viciously raped. The cops secured the evidence and the case was a slam-dunk shoe-in, at which point the powers that be had it dropped. The girl’s mother is livid and wants justice, in whatever form she can get it.

Cue hiring Dawson. We don’t get to know too much about him, other than the word “enigma.” He gets the case file from the Assistant DA and the cop whose case it was.  Our rapist is wanted as a witness to drop the dime on a bigger fish that the Feds want to fry and is in witness protection.

Dawson goes on the hunt.

Amazing dialogue and jaw-dropping prose? No, but enough to entertain and satisfy for an hour’s reading. I was keen to see how it all worked out and I wasn’t at any point wanting to be reading anything else.

Short and sharp – job done. And enough to have me contemplating reading something longer by the author at some point. The intro to Fatal Destiny wasn't bad, so I'll maybe make the leap with that one.