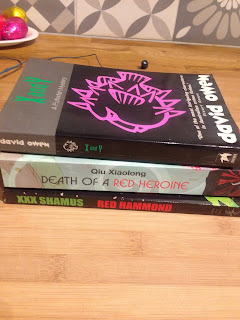 X by Sue Grafton, the 24th entry in the Kinsey Millhone series.
To date I've read exactly one - A is for Alibi. Sadly Grafton died in 2017 before she could complete her Alphabet series of mysteries.

In hindsight, I marvel at how clueless I was . . . What I ask myself even now is whether I should have picked up the truth any faster than I did, which is to say not fast enough . . .

When a glamorous red head wishes to locate the son she put up for adoption thirty-two years ago, it seems like an easy two hundred bucks for private investigator Kinsey Millhone. But when a cop tells her she was paid with marked bills, and Kinsey's client is nowhere to be found, it becomes apparent this mystery woman has something to hide. Riled, Kinsey won't stop until she's found out who fooled her and why.

Meanwhile, the widow of the recently murdered P. I. – and Kinsey's old friend – Pete Wolinsky, needs help with her IRS audit. This seemingly innocuous task takes a treacherous turn when Kinsey finds a coded list amongst her friend's files. It soon leads her to an unhinged man with a catalogue of ruined lives left in his wake. And despite the devastation, there isn't a single conviction to his name. It seems this sociopath knows exactly how to cause chaos without leaving a trace.

X and Y from David Owen.

It's the 3rd entry in the Tasmanian set Pufferfish detective series.
It's a series I've dipped in and out of. I read the first couple way back when and some more in recent years, when the author re-commenced the series after a 12 year hiatus.
13 Point Plan for a Perfect Murder, the 7th was enjoyed in 2017.
Big Red Rock, the 9th was enjoyed in 2018 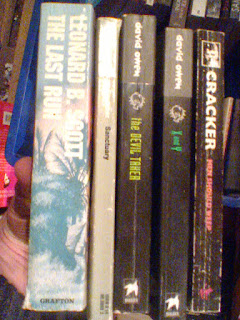 You can bend copper. All it takes is a little heat, a touch of persuasive muscle. But can you bend a poisonous fish?

Drug barons and international operators move in on the Apple Isle for what look like easy pickings. Detective Inspector Franz Heineken - aka Pufferfish - is busy tracking a series of top-drawer break-ins, when he is assigned to a government narcotics taskforce.

When its surveillance operation goes spectacularly and embarrassingly wrong, it is Heineken - weary, disaffected, and hankering for a seaside retirement - who looks a likely candidate for corruption. Enemies inside and outside the Force clearly have him in their sights. But they, like Pufferfish, fail to take into account the unknown X and Y factor.

Qiu Xiaolong, Chinese author of the Inspector Chen books. I've had the first in the series a while and never read it.

A young “national model worker,” renowned for her adherence to the principles of the Communist Party, turns up dead in a Shanghai canal. As Inspector Chen Cao of the Shanghai Special Cases Bureau struggles to trace the hidden threads of her past, he finds himself challenging the very political forces that have guided his life since birth. Chen must tiptoe around his superiors if he wants to get to the bottom of this crime, and risk his career—perhaps even his life—to see justice done.

Hammond's only novel. Not really. It's a pseudonymous offering from an author I've enjoyed reading for a long time. Who is it? Google it yourself and find out. 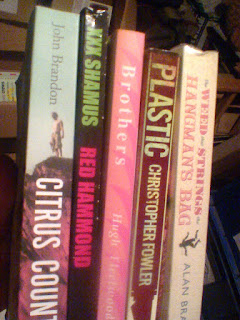 Hopper Garland is good at finding lost girls. When his last target tries to take her life upon being discovered, he begins to rethink his career as a private eye. However, a persuasive offer from a sexy woman has him back on the case, chasing a missing sixteen-year-old pregnant girl from the swampy ruins of post-Katrina New Orleans to the neon grime of Las Vegas. Along the way he'll have to contend with a rogue's gallery of henchmen, pornographers, and his own incestuous sister. After he makes a deal with a sociopathic murderer who believes he's found the secret to eternal life, Hopper will relearn that old saw: some things are better off left alone.