A couple from Deon Meyer, an author I have actually read something from. 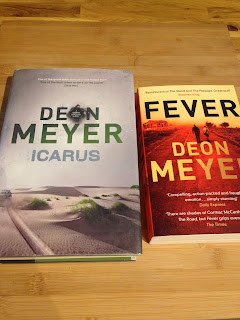 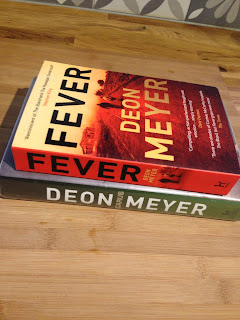 Most of his books are set in and around Cape Town. There's thirteen in total including seven in his series featuring an alcoholic cop, Benny Griessel

I hope to read the other eight in the next couple of years. 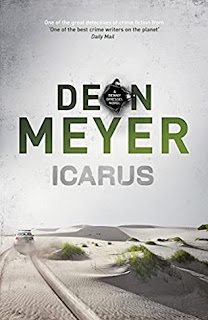 Selected by Marcel Berlins in The Times as one of the 50 best crime novels of the last 50 years: 'Deon Meyer is acclaimed for his portrayals of crime and the police after the end of apartheid. Non-white detectives hold positions once monopolised by their white bosses, and the tensions are high'

So when Benny is called in to investigate a multiple homicide, it pushes him close to breaking point - a former friend and detective colleague has shot his wife and two daughters, then killed himself. Benny wants out - out of his job, his home and his relationship with his singer girlfriend, Alexa. He moves into a hotel and starts drinking. Again.

But Benny's unique talent is urgently required to help investigate another crime - the high profile murder of Ernst Richter, MD of a new tech startup, Alibi, whose body is discovered buried in the sand dunes north of Cape Town. Alibi is a service that creates false appointments, documents and phone calls to enable people to cheat on their partners. It has made Richter one of the most notorious people in South Africa. Can Benny pull together the strands of his life in time to catch the killer? 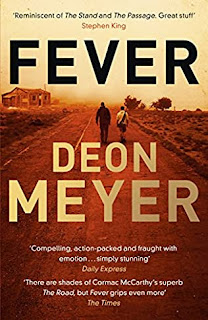 I want to tell you about my Father's murder.

I want to tell you who killed him and why.

This is the story of my life.

And the story of your life and your world too, as you will see.

Nico Storm and his father drive across a desolate South Africa, constantly alert for feral dogs, motorcycle gangs, nuclear contamination. They are among the few survivors of a virus that has killed most of the world's population. Young as he is, Nico realises that his superb marksmanship and cool head mean he is destined to be his father's protector.

But Willem Storm, though not a fighter, is a man with a vision. He is searching for a place that can become a refuge, a beacon of light and hope in a dark and hopeless world, a community that survivors will rebuild from the ruins. And so Amanzi is born.

Fever is the epic, searing story of a group of people determined to carve a city out of chaos.
Posted by col2910 at 01:18