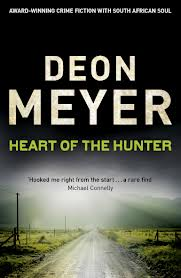 
When Johnny K is kidnapped and held to ransom, his daughter turns to his old friend Tiny. She has 72 hours to deliver a disc with sensitive data on it to the kidnappers. But some people are watching Tiny’s every move – waiting for him to trip up and lead them to what they want.


Phew........ 420-odd pages of pure adrenaline filled, roller-coasting rocket fuel. I managed to read this in less than a day over the weekend, when I might typically read on average about 100-odd pages a day over the course of a month.


There must be something in the water in South Africa as Meyer and his fellow countrymen, Mike Nicol and Roger Smith have churned out some of the best crime fiction I’ve read in the past 6 months.


Heart Of The Hunter is one of Meyer’s earlier books originally published back in 2003. Since then he has attracted a wider audience with 13 Hours, Trackers and his latest book 7 Days. Of his 3 most recent books, I have only read Trackers which if I’m totally honest didn’t blow me away like this and last month’s reading highlight- Blood Safari. 13 Hours is on mount TBR along with his earlier stuff.


Meyer gives us Thobela Mpayipheli – former fighter in the struggle for equality in South Africa. Thobela has a checkered past; previously loaned out by the ANC resistance, as a favour to operate for the KGB as an assassin; but now post-apartheid surplus to requirements. Thobela after a few years as an enforcer in the drugs trade has gone straight. With an ordinary Joe job and his love for a women and her son he has a dream of a farm where they can bring up the boy away from the dangers and temptations of the crime-ridden city; a place where he can learn to grow crops and see life flourish from his efforts, instead of choking it off at the core.


Tiny’s plans are on track, until a former friend is kidnapped and he’s sucked back into the vortex. To save his friend he has to deliver a disc to Lusaka within 3 days. Before too long he’s fallen foul of the intelligence services seeking to recover the disc and stop the data falling into enemy hands. Thebola fleeing on a stolen motor-bike becomes a fugitive in a massive man-hunt organised by the authorities and fueled by the media which has broken the story.


Does the interests of the state, over-ride the basic rights of her citizens? Can you be loyal to the state but retain your principles and behave according to your conscience? Can people fundamentally change and out-grow their past and become more?


Sometimes you start reading a book that starts out in a promising fashion, but along the way loses its edge and ultimately crawls to an unsatisfactory conclusion. Not this book, and from the evidence of the last month or two, not this author. Pedal to metal from first page to last


Borrowed from my local library.