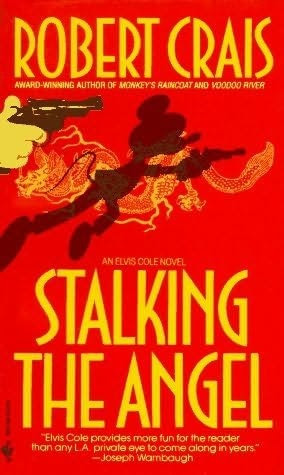 
Bradley Warren had lost something very valuable, something that belonged to someone else: a rare thirteenth-century Japanese manuscript called the Hagakure.


Everything PI Elvis Cole knew about Japanese culture he'd learned from reading SHOGUN, but he knew a lot of crooks - and what he didn't know, his sidekick Joe Pike did.


Together, Cole and Pike begin their search in L.A.'s Little Tokyo, the nest of the notorious Japanese mafia, the Yakuza - and find themselves caught up in a white-knuckled adventure filled with madness, murder and sexual obsession. Just another day's work for Elvis Cole...

Hot on the heels of the first Crais/Elvis Cole novel I read on Saturday, the second instalment was done and dusted on the following day. Don’t you just love weekends where you can pretty much just chill and do nothing but read? I’ll have to make the most of them, because in a month or so, with spring around the corner I’ll no doubt be cutting the grass or trimming trees or painting the shed.


Anyway.....Cole gets hired to recover a valuable Japanese manuscript recording the warrior code of the Samurai; the Hagakure. His employer, Bradley Warren is a successful, driven businessman, married to a wife with a penchant for daytime boozing and a daughter, Mimi  he seemingly has no connection to either. Warren, unlikeable from the off needs the manuscript found to placate his Japanese trading partners.


Cole in pursuit of the script in Little Tokyo crosses words with the Japanese Yakuza and manages to annoy several branches of law enforcement along the way. After ignoring threats to his family, Warren fires Cole after the kidnapping of his daughter. Cole feeling responsibility towards the unhappy girl persists in investigating the crimes, now more focused on recovering the girl instead of the book.


Pike, the enigmatic partner assists as does Warren’s previously aloof assistant. Cole tracks Mimi down and there the story endeths...........err, not really as Crais burdens Cole with a heavier load to resolve.


Entertaining and enjoyable, but slightly less so than The Monkey’s Raincoat as far as this reader was concerned.


I bought my copy new, back in the days when my hair was its original colour and my waistband considerably smaller.