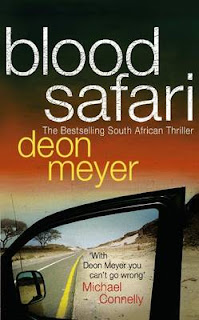 LEMMER is a professional bodyguard. Silent and invisible, he never gets involved.

EMMA LE ROUX believed her brother died twenty years ago, until she sees him on the news as the prime suspect in the brutal killing of four poachers.

As Lemmer and Emma join forces in pursuit of the truth, it soon becomes clear that someone is willing to do whatever it takes to stop them.

When that someone tries to murder them both, Lemmer is forced to step out of the shadows for the first time in his life.

This time around I have to say Meyer impressed me no end. South Africa with its landscape of sprawling, vast grasslands, nature reserves and dusty veldt and its recent political history of apartheid and the subsequent dismantling of the white minority led state provides a rich back-drop for the novel.
Emma le Roux is seeking answers about her long-lost brother after a brief sighting of a photo on a news bulletin.  Her interest, 20 years after his disappearance sets off an increasingly violent chain of events. After an unsuccessful home invasion and some threats received over the phone, she hires Lemmer for protection while she tries to establish whether the man wanted for the brutal slaying of poachers is her brother.

Lemmer, Meyer’s main character is interesting; a former bodyguard for government ministers but now after a period inside for manslaughter he’s working in the private sector.  Solitary, aloof and fiery, with a barely repressed penchant for violence he’s one of my favourite protagonists figuring in my recent reads of the last couple of months or so.
Meyer mixes the plot well, expertly weaving into the narrative recent South African history with its volatile neighbour, Mozambique, as well as eco warriors-cum- terrorists fighting against developers and tribal land claims. Economics and social and racial tensions are all combined together to provide a compelling read.


5 from 5
Borrowed from my local library in Leighton Buzzard