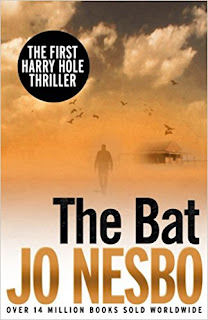 HARRY IS OUT OF HIS DEPTH.

Detective Harry Hole is meant to keep out of trouble. A young Norwegian girl taking a gap year in Sydney has been murdered, and Harry has been sent to Australia to assist in any way he can.

HE'S NOT SUPPOSED TO GET TOO INVOLVED.

When the team unearths a string of unsolved murders and disappearances, nothing will stop Harry from finding out the truth. The hunt for a serial killer is on, but the murderer will talk only to Harry.

Appearing in English for the first time, The Bat is the legendary first novel from the worldwide phenomenon Jo Nesbo.

This was my first taste of the Scandinavian writer, Jo Nesbo - my OCD-like tendencies having caused me to spurn earlier opportunities to read him, in favour of his waiting for his first published book, The Bat to become available at my local library.
Having collected it Thursday evening, I read a chapter on Friday night, got properly stuck into it on Saturday afternoon and finished it Sunday evening.
First thoughts – better than average, without blowing me away totally. Perhaps most debuts aren’t the best work an author can produce and his later books are stronger, although this did win the 1998 Glass Key Award – for best Scandinavian Novel of the year.
Harry Hole – Nesbo’s Norwegian policeman pitches up in Sydney to assist in the investigation into the violent death of a young Norwegian woman.  After initially only being assigned an observer role in the investigation, Harry and his Aboriginal babysitter, Andrew Kensington are drawn deeper into the pursuit of a serial rapist-killer.
The novel immerses Hole into Sydney’s notorious King Cross area, full of seedy bars, strip joints and prostitution. Kensington befriending Harry gives Nesbo the opportunity to provide some background history to the difficulties between the Aboriginal indigents and white-Australia, as well as imparting some knowledge on some Aboriginal cultural beliefs and legends.
Whilst I enjoyed the book in the main, particularly Nesbo’s ensemble of characters, as well as the violence that seemed never too far away from Hole, I wasn’t totally convinced by Harry’s subsequent phoenix-like rise from the ashes of his latest alcoholic lapse.
Where Nesbo did score points with me was with his readiness to dispense permanently with key characters during the execution of the investigation.
I’m looking forward to more reading more from Nesbo, though can’t decide whether to wait for the second Harry Hole instalment when it is published in English later this year – The Cockroach, or skip ahead to The Redbreast ( Hole - number 3), or alternately the standalone book Headhunters.
4 from 5
Reserved and borrowed, after sitting in a queue of 9 from Leighton Buzzard library.
Posted by col2910 at 04:58