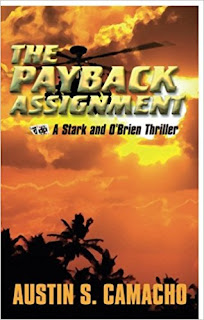 Blurb.......
Morgan Stark, a black mercenary soldier, is stranded in the Central American nation of Belize after a raid goes wrong. Felicity O'Brian, an Irish jewel thief, is stranded in the jungle south of Mexico after doing a job for an American client. When these two meet, they learn they've been double-crossed by the same person: Adrian Seagrave, a ruthless businessman maintaining his respectability by having others do his dirty work.
Morgan and Felicity become friends and partners while following their common enemy's trail. They become even closer when they find they share a peculiar psychic link, allowing them to sense danger approaching themselves, or each other. But their extrasensory abilities and fighting skills are tested to their limits against Seagrave's soldiers-for-hire and Monk, his giant simian bodyguard. After a series of battles from the California coast to the New York Public Library, they must face a final confrontation with Seagrave's army of hired killers in a skyscraper engulfed by flames. "The Payback Assignment" is the first in a series of novels featuring Morgan Stark and Felicity O'Brian.


I picked up over on the Crimespace website that the author was offering this over the new year for free on Amazon kindle, so being the cheapskate that I am downloaded it, even though the numbers of books in various formats I have to wade through is somewhat ridiculous.

It wasn't the best book I've ever read, but by no means the worst either. There's a decent enough plot, which moves at pace. The two main characters are likeable enough, but I'm not moved sufficiently to abandon all book-buying restraint in my haste to read the next two installments in the Stark and O'Brian series.

I read it in just over a day, which wouldn't happen if I wasn't enjoying the book. On the whole decent and engaging but not something that will stay with me for a long time, invading my thoughts at odd moments. I had a slight problem with the characters reactions to getting things on together, which probably tempered my overall score.

Camacho has written another series of action books of which I have the first - again an author kindle giveaway on Amazon. I'll get to it at some point in time - The Troubleshooter (Hannibal Jones Mystery Series).

Acquired through Amazon UK kindle for zilch.
Posted by col2910 at 23:13