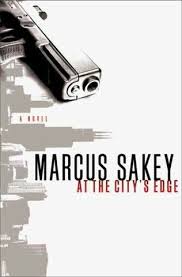 
Jason Palmer loved being a soldier. But after returning home from Iraq with an "other than honorable" discharge, he's finding rebuilding his life the toughest battle yet.


Elena Cruz is a talented cop, the first woman to make Chicago's prestigious Gang Intelligence Unit. She's ready for anything the job can throw at her.


Until Jason's brother, a prominent community activist, is murdered in front of his own son.


Now, stalked by brutal men with a shadowy agenda, Jason and Elena must unravel a conspiracy stretching from the darkest alleys of the ghetto to the manicured lawns of the city's power brokers. In a world where corruption and violence are simply the cost of doing business, two damaged people are all that stand between an innocent child--and the killers who will stop at nothing to find him.

Started well with a furious opening, Jason Palmer ambushed at gunpoint by a couple of black gang members. After his escape the story continued to engage for about 50 pages or so, before embarking on a slow torturous downward spiral into mediocrity and cliché.
Decent enough action scenes, reasonable dialogue but these alone weren’t sufficient to arrest the slide, with  a cast of stereotypical characters; Cruz, for starters  - the token Hispanic cop wronged by the power brokers on the force and Washington - the reformed black gangster trying to effect change in the youth on the impoverished Crenwood streets.


The motivation behind the killing of Michael Palmer and the actual raison d’etre for the whole book just wasn’t believable in my opinion. I just couldn’t buy into certain aspects of what Sakey was trying to sell. I won’t expand upon this in the unlikely event that someone reads this and either happens to have a copy of this on mount TBR or wants to read it at some point in the future. I’m fairly certain that I have seen a film with a similar plot-line, though I can’t for the life of me remember what.
I can remember reading Sakey’s debut novel - The Blade Itself - when it came out a fair few years ago in 2007 and enjoying it, marking him down at the time as someone to keep an eye out for. Hopefully this book was a temporary blip in an otherwise stellar career. I’ll know more when I’ve read The Two Deaths Of Daniel Hayes at some point in the distant future. I’m not in too much of a hurry to pick it up now to be truthful.


2 from 5
My copy was bought back in 2011, though I can’t remember where from – online and second-hand at a guess.