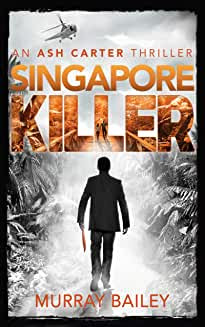 A helicopter crash and burned bodies.
A faceless corpse. A mysterious town. It's September 1953 and Carter is drawn into a dark case from which there seems no escape.

Singapore Killer is the fifth entry in author Morgan Bailey's Ash Carter series, but read well on its own for this newbie entrant to the author and his character. I didn't feel like I had missed out on not having encountered the character before.

Carter is ex-British army and is now working as a private investigator in Singapore in the early 50s. Work is a bit slack, with his female Chinese assistant, Madame Chau trying to keep him busy with small cases such as missing dogs and local extortion. I quite liked their relationship. She exudes Oriental inscrutability on the surface, but frets when Carter is away from the office on a case, forcing him to report in each evening - a real mother hen.

Carter catches a big one, his army contacts serving him well. A helicopter has come down with the pilot dead along with another charred corpse aboard. Carter is asked to have a look and manages to piece together some of what happened. It's apparent that its more than just pilot error or mechanical failure, a fact confirmed by the subsequent examination of the pilot's body and the bullet wound in the back of his skull. The helicopter was being used on a prisoner transportation but details about the passenger are unrecorded. The other corpse is suspected of being a military policeman.

Another murder follows, seemingly disguised as a local tribal ritual, but poorly done - deliberately so. A faceless killer is at work and leaving titbits of clues taunting whoever is on his trail. In this case our man, Carter. The narrative alternates at times and we get the killer's POV as he moves from victim to victim. There's no apparent profit motive as such for his kills. He enjoys the work, takes pride in his skill set and enjoys a challenge. He'd rather kill an able adversary than a meek one.

Events eventually lead Carter to a remote secretive cult-like settlement, Shangri-la populated by mainly ex-British servicemen, which calls for some undercover infiltration. As well as a front for a smuggling operation, the leader and his posse is also responsible for the enslavement of native women in order to satisfy certain needs. Ash believes the Blackjack killer is part of or very close to this community. There are additional dimensions to his remit now.... find the killer, free the women, close down the smuggling op.

I have to admit, I'm not usually one for a serial type killer book, playing games with his adversary, but I quite liked it here. I think the setting and timeframe of Singapore in the 50s with an established British military presence and the local colour and culture, with the small towns, the jungle, the various ethnicities of the people, and the travel throughout the country helped.

A laptop fail has denied me access to the book, so I'm kind of struggling a bit with this rambling review without having recourse to the text. The story flows a lot better than the disjointed plot points outlined above. There's a connectivity and logical progression to events which sees Carter crossing paths with old friends and other interested parties along the way, before the climax of the book.

I quite liked the main character, though there's not really an abundance of backstory for him. Perhaps it was covered in previous books. There's enough about him to view him as a decent investigator and person. He has an opportunity to dally with a lady on one of his cases, but enough scruples to decline her overtures. He's loyal and invests the same energy into his smaller cases as he does into the murder investigation. He's a gentleman. Without necessarily feeling like I need to backtrack on previous books in the series, I'd be interested in reading another future case for Ash Carter. In that respect the author has succeeded.